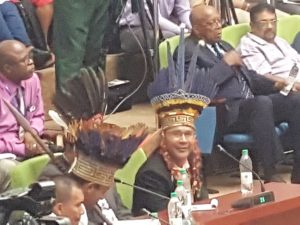 Chairman of the National Toshaos Council, Joel Fredericks on Monday slammed the Guyana government for failing to keep several promises including addressing land rights and constitutional reform over the past three years.

“Every time we break promises, we erode the trust that people have in us and our integrity,” he told the opening of National Toshaos Council Conference.

Among the promises he said that were broken by the David Granger-led administration included the lands commission, revision of the Amerindian Act, Constitutional Reform, grabting the title for the land on which the NTC Secretariat would be built and the renaming of St. Cuthbert’s Mission to Pakuri, the Indigenous name.

Speaking after Fredericks, Junior Minister of Indigenous Affairs, Valerie Garrido-Lowe warned the Toshaos and others from the indigenous communities to guard against those playing politics or they should submit their resignations immediately.

Fredericks noted that in defending their rights over the past three years, Amerindian people’s were “made out to be oppositionists…but we did stay strong”.

As the NTC Chairman was speaking, President Granger was seen making notes.

Moments after Fredericks speech, the chairman of the event called on attendees to stand and sing “Happy Birthday” to the Guyanese leader.

Garrido-Lowe singled out several achievements in Amerindian communities including the development of small businesses, establishment of community radio stations, and better academic records.