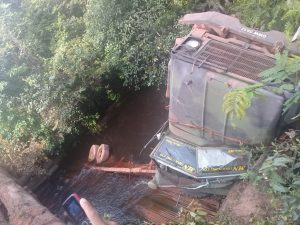 Public Infrastructure Minister, David Patterson said interior road users could expect some improvements in two weeks and a plan has been crafted to avoid a recurrence next year.

He acknowledged that part of the problem appeared to have been the award of contracts “a bit late” by the Ministry of Natural Resources and the Guyana Geology and Mines Commission.

Sources have already told Demerara Waves Online News that technical experts at the Public Infrastructure Ministry had already drafted a repair and maintenance plan since November, 2017 but no money had been made available.

Now, Patterson said that with the release of funds and the award of contracts to several firms works have already started and road users would experience some relief in two weeks. “I do think that in a couple of weeks there will be relief going forward.”

The Public Infrastructure Minister indicated that the road repair and maintenance plan would be “coordinated differently” from next year”. “I think we have to make a change on how we do it next year to ensure we don’t have a repeat…It’s already in discussion so changes will be made”, he said.

The minister said he had not received any official word from the manufacturers that the bad road conditions have forced the closure of some operations, particularly since that section of the business community is integrally involved in talks. “To be honest, it would be quite surprising because the manufacturers are part of the hinterland coordinating group and I know that they have submitted their priority routes which are the roads that are being looked at right now,” he said.

The Guyana Manufacturing and Services Association (GMSA) on Thursday complained bitterly that the badly deteriorated interior roads caused by the prolonged rainy season have resulted in a loss of value-added wood exports and the temporary laying off of workers.

The business organisation called on government to immediately fix the “deplorable” roads across the regions in Essequibo, Demerara and Berbice. “The GMSA calls on Government to take urgent action to repair and maintain interior roads and for there to be a comprehensive programme of ongoing maintenance to ensure quality and standard is maintained,” the Private Sector Commission’s affiliate said.

The manufacturing association accused government of contributing to the poor condition of the roads. “The failure to maintain the interior roads prior to the rainy season, has led to further crisis and has placed a very bleak outlook for many industries including forestry, mining, tourism, and trade,” the organisation. 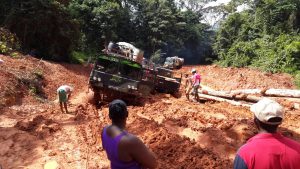 Providing statistics to back up its claim of falling production, the GMSA said small, medium and large scale timber and wood product producers are the hardest hit because at least 100,000 m3 of logs destined for delivery to markets cannot be transported. “As a consequence many value-added manufacturers are complaining about the lack of raw material which is affecting exports.  This unfortunate situation has resulted in significant social and economic impacts. Some companies have had to completely stop production,” the association added.

Sources have reliably informed Demerara Waves Online News that a maintenance plan had been developed since November 2017, but it was only about two months ago that government released funds to several contractors for the already badly damaged roads. 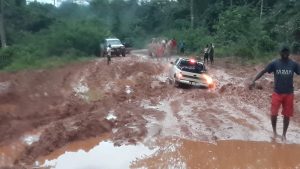 Another section of the Puruni Road

Figures, according to the GMSA, also show that the earnings of many timber companies have fallen by at least 50 percent, causing some workers to be sent home. “Skilled workers are being sent home or the workforce being downsized due to the worsened condition of the roads. There are many small-scale loggers who are unable to stop working because of their financial commitments and such operators are putting their lives in danger and causing damage to their limited equipment,” said the GMSA.

Explaining the plight of some of its members, the GMSA said as much as 30 percent of the cost of production in the forestry sector is linked to transportation, and the cost of repair and maintenance being done by some companies is exorbitant. “This is a key factor that has been driving production cost for large operators.,” the association said.

Large forest concessionaires, mainly holders of Timber Sales Agreements, the association said, are currently spending on average US$14, 000 to construct one kilometer of forest road and on average US$5,000 on maintenance of such roads within their concessions without any support from Government.

2018-07-13
Denis Chabrol
Previous: Construction of Linden-Lethem road to begin this year
Next: Bank of Guyana gets stronger legal teeth to deal with weak, failing financial institutions