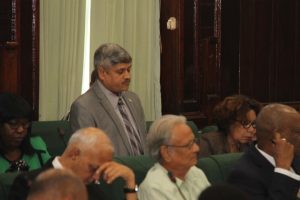 Junior Finance Minister, Jaipaul Sharma on Friday virtually blamed the Guyana Police Force for the failure to charge and prosecute many persons stemming from several forensic audits that cost the National Treasury millions of dollars.

“If I am the person conducting the audit, I know what the audits contain and I am annoyed that there is no prosecution,” he told the House.

In his contribution to debate on legislation that will pave the way for the establishment of a National Payments System (NPS), Sharma questioned whether the almost lack of movement had anything to do with the police force’s Special Organised Crime Unit. “I want to know why there is no prosecution. Is it SOCU not doing their work, is it the law weak, is it the legislation weak? What really is happening?” he said.

Sharma, who is responsible for audits, said he was aware of a lot of issues before the court which are hindering the police from performing their duties. He noted that the forensic auditors did not have the authority to check persons’ bank accounts, summon persons, and arrest persons- all of which are the responsibilities of the Guyana Police Force.

“If the police are finding difficulty to summon witnesses to court or to ask the bank for any provide information, this is the reason why it is being stalled,” Sharma said.

In the past, SOCU sources have complained  about a shortage of investigators and specialised personnel to conduct the necessary analysis. Sources have also expressed concern that many of the files have been shuttling to and from the Police Legal Adviser’s Office, Director of Public Prosecutions Chambers and more recently referrals to the State Assets Recovery Agency.

At least two joint charges have been filed against several former managers and  former directors of the Guyana Rice Development Board for failing to enter information in a ledger.

Separate charges concerning the alleged misuse of funds from Venezuela’s now cancelled PetroCaribe oil-for-rice deal have also been held up after a commercial bank failed to produce the relevant records at SOCU’s request.

The Guyana Bank for Trade and Industry has since challenged the validity of the production order issued by SOCU.