First Bauxite gets US$10 million loan to develop Bonasika project 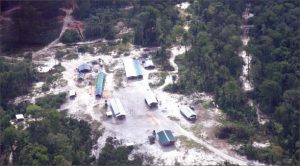 An aerial view of the camp at First Bauxite’s Bonasika bauxite project near Guyana’s coast. (photo from Northern Miner)

NEW ORLEANS, June 15, 2018 — First Bauxite Corporation on Friday announced that it has received a second bridge loan to the amount of US$10 million  to be used for the Bonasika Bauxite project located in Guyana.

The loan, which was provided by with Resource Capital Fund VI L.P, would be used for the construction, mining and processing facilities at Bonasika, the company said it informed Guyana government ministers.

The Company says it has formally notified the Guyana Geology and Mines Commission that proceeds of the Second Bridge Loan will be utilized to commence construction of its mine and processing operations for its Bonasika Project in Guyana as required under its Mining License.

First Bauxite says it is committed to improvements to local infrastructure and keeping Guyana working. Initial construction activity is expected to include improvements in local infrastructure including the construction of a haul road, wharfs and roll-on/roll-off ramps on the Demerara River, and upgrades to the mine camp, all of which will utilize local contractors where possible.

“Additional local employment is expected to be created by local suppliers to provide goods and services in support the ongoing operations of the Company,” First Bauxite said.

The Second Bridge Loan will be repayable in full on the earlier of the demand of RCF VI after an “Event of Default” ; and (2) the maturity date falling 12 months after the date of the first advance of the loan under the first bridge loan agreement signed in January 2018 received January 26, 2018.

“The First Bridge Loan and Second Bridge Loan would become immediately due and payable in full upon the incurrence, creation or assumption by the Company or any of its subsidiaries of any indebtedness or the establishment, sale or creation of any royalty, metal stream or similar arrangement in connection with financing the
Company’s Bonasika Project and the Company’s bauxite mining and beneficiation plant in Guyana, in an aggregate amount of more than US$25 million,”

Interest will accrue at a rate equal to 10.0% per annum, which will immediately be increased by 3.5% annually on
the occurrence of an Event of Default, all accrued and outstanding interest on the Bridge Loans to be payable on the date of repayment of the Bridge Loans.

RCF VI is also the holder of an option to acquire all of Pacific Road Resources Funds’ 13,127,984 common shares of the Company and C$9,847,901 aggregate principal amount of Notes. The Option may be exercised at any time until June 30, 2018.

Assuming exercise of the Option and conversion in full of the aggregate principal amount of the Notes at a
conversion price of C$0.10 per common share, RCF would acquire an additional 434,577,551 common shares of the
Company. The Second Bridge Loan is therefore a “related party transaction” (as such term is defined in MI 61-101).

First Bauxite Corporation is a Canadian natural resources company engaged in the exploration and development of bauxite deposits in Guyana, South America.