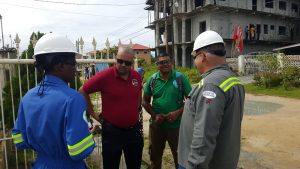 Executive Director of the Enviromental Protection Agency, Kevin Parsram (burgundy shirt) being briefed by Massy Gas experts who conducted tests at the scene.

Executive Director of the Environmental Protection Agency, Kemraj Parsram told reporters the results he moments before received from experts at Massy Gas Products. 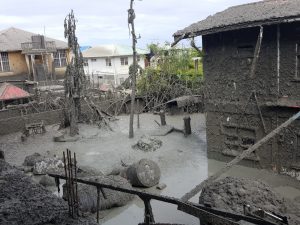 “From this initial assessment, there is o indication of high concentration of natural gas; small pockets. These are naturally occurring so you will see a little thing. The reading was very, very low so nothing to cause alarm,” he said.

Parasram said it is possible that the mini crater could be capped.

Director-General of the Civil Defence Commission, Lt.Col. Lester Craig told Demerara Waves Online News that the occurrence appeared to be related to a high-pressure aquifer located at about 130 feet deep.

Legal experts said the man who drilled the water well that led to the almost 24-hour sludgy eruption could find himself in trouble if he did not receive permission.

The EPA Executive Director said after the situation is brought under control, records at the EPA and Guyana Water Inc would be checked to ascertain whether an application had been made to sink a water well.

However, his business has ground to halt. Huge black tanks and domestic five gallon water bottles were partly covered by the debris.

Meanwhile, occupants of the lower flat were seen removing mud-coated household items to a neighbour’s yard.

Nearby buildings were damaged by the mud that erupted more than 30 feet into the air.