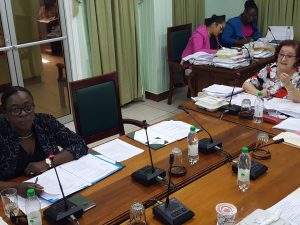 Foreign Relations Committee Chairman, Gail Teixeira (right) and Minister of Education, Nicolette Henry (left) at the meeting of the parliamentary committee on Foreign Relations on June 13, 2018.

Immigration records show that more than 20,000 Haitians and Cubans are still in Guyana, the bulk of them having arrived here in 2017 and up to April of this year, raising concerns about “human trafficking”.

The bipartisan parliamentary committee on Foreign Affairs decided to summon Minister of Foreign Affairs, Carl Greenidge and Minister of Citizenship and Immigration, Winston Felix to explain the presence of the Haitians and Cubans here.

“It’s not a question of who is trickling in. The issue is not who is coming and going; it’s the issue of the numbers remaining and where you can’t find them, you can’t see them…This is trafficking, this is trafficking,” said Committee Chairman, Gail Teixeira.

In response to concerns by Committee Member- Minister of Education, Nicolette Henry-, Teixeira said the Committee  that up to February, 2018 was not aware of the high number of Cubans in Guyana until Minister of Citizenship and Immigration, Winston Felix responded on May 23, 2018 with arrivals and departures for several nationalities.

Charging that the number of Haitians arriving and remaining here “has jumped so rapidly”, Teixeira later remarked that “this is trafficking”. Henry did not let that comment go unnoticed and she pointed out that Guyana has recorded an improved ranking by the United States as far as the fight against trafficking in persons.

The statistics provided by Felix to the Committee show that  7,255 of the 44,747 Cubans who went to Guyana last year have not departed, and of the 22,520 who entered Guyana from January to April of this year,  6,170 are still here.

Opposition People’s Progressive Party (PPP) Committee Member, Zulficar Mustapha expressed concern that there was no information about where the Haitians were living, whether they were granted residency or citizenship,  allowed to be registered by the Guyana Elections Commission (GECOM) and given national identification cards.  Teixeira said she was also concerned whether the foreign-born children were being enrolled in schools and being vaccinated. Committee member, Nigel Dharamlall, also of the PPP, said the Minister of Citizenship needs to come prepared to tell the Committee how many of the foreign nationals have come as tourists, settlers and traders.

Teixeira noted that unless a deep data search is conducted about individuals, immigration statistics do not show repeat departures.

That decision to summon Felix and Greenidge to the Committee came after a heated exchange between Teixeira and Minister Henry after the minister observed that the  proportion of Bangladeshis remaining in Guyana is much higher than the Haitians. Henry reasoned that almost 30 percent of them were probably in Guyana. However, Teixeira retorted, saying that only 300 Bangladeshi arrived in Guyana between 2013 and 2018, and only 74 are in Guyana. That, she said, was in contrast to the 1 in 5 Haitians who are remaining in Guyana.

Teixeira added that 5,000 Haitians in Guyana was problematic in contrast to a similar number of returning Guyanese who could easily reintegrate and be indistinguishable.

The Minister of Education highlighted that the Committee appeared to be flagging one group and called for the Committee to address all groups. “I could not subscribe to just highlighting a particular thing because you want to make a point that obviously is not where we should be going,” she said, instead of grand-standing in the presence media.

Dharamlall of the PPP said if there are about 5,000 Haitians, more than 3,000 Chinese, more than 800 Brazilians, 240 Indians, 17,000 Cubans, more than 1,000 from the Dominican Republic and 74 from Bangladesh, the “worrying trends would be the extreme numbers” because they are large communities. “I think there has to be greater investigation of these numbers especially on the Haitians and the Cubans,” he said.