International Decade of People of African Descent-Guyana must be scrapped, replaced

Representatives of several African groups from across Guyana on Sunday agreed by majority to call for the country coordinating mechanism for the Decade for People of African descent to be scrapped and a new body established over concerns about its formation and decision-making.

When the vote was taken, 36 persons showed their hands for the mechanism officially named the International Decade of People of African Descent – Guyana (IDPAD-G) to be dismantled and 16 persons voted for it to be repaired instead of restarting from scratch.

Chairman of the meeting, Jonathan Adams said the current IDPAD-G management would be formally informed of Sunday’s decision and the next course of action will depend on its response. “It is part of our responsibility as an African collective to determine whether that is the kind of expression that we want for ourselves,” Adams said.  He called on the participants to mend their divisions and work together for the common good of African Guyanese. “It does not meant that if you did not agree with the decision you would not work in the best interest of the African community,” he said.

At a meeting held at Critchlow Labour College (CLC), representatives expressed concern about Olive Simpson’s appointment as IDPAD-G’s Chief Executive Officer. Member of the existing Coordinating Council, Esther Gittens noted that the newspaper advertisement for the post of CEO was deliberately very small and there were no criteria and evaluation sheets for the job interview of the three applicants. 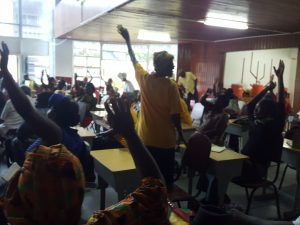 A section of a meeting voting for a new International Decade for People of African Descent-Guyana to be changed.

She noted that IPADA-G was stacked with mostly Cuffy250 members that also saw Dr. Mark Kirton and Dr. Norman Ng-a-Qui being drafted in to serve the national coordinating mechanism. Dr. Eric Phillips of the Reparations Committee added that half of the groups under IPADA-G’s assembly were formed last year on the basis that they would be offered projects and those groups did not include those that 20 years old.

“The assembly is illegitimate from the beginning,” Phillips added.

After several meetings with President David Granger with representatives of the African community to, according to Dr Eric Phillips of the Reparations Committee, address the welfare and needs of Afro-Guyanese under the rubric of the United Nations-designated Decade (2015-2024), IPADA-G was established and GY$68 million set aside for its secretariat.

Phillips warned that IDPADA-G’s rental of office space at 121 Regent Street, Bourda from Charles Corbin would give political ammunition to the opposition People’s Progressive Party (PPP) to raise concerns about conflict of interest between Corbin and IDPADA-G’s Chairman, Vincent Alexander because they are both Commissioners of the Guyana Elections Commission.

Noting  that Charles is the brother of former People’s National Congress Reform (PNCR) Leader, Robert Corbin, Braithwhaite said he had tried to make a case for the IPAD-G Secretariat to be housed in a government ministry for at least one year. “Any secretariat must be on neutral ground,” he said.

Phillips said the President was aware of the problems facing IPADA-G and appeared to be very disappointed with what was going on in the organisation, after having received their representations by the African Cultural Development Association (ACDA) on the “Black economy” since 2015 to find ways of improving the condition of African Guyanese. Strategies, Phillips said, should include provision of land, oil, procurement, establishment of a bank, African development fund and preferential access to State resources.

He recalled telling Alexander that his proposed structure and strategy were wrong and was more government bureaucracy-oriented with 15 groups. Instead, Phillips recommended that the five thematic areas of expiation, economy, equality, employment and education should be the basis for groups, with individual chairpersons, to craft policies, programmes and projects. Phillips said he also complained many times that the power is vested in the Chairman and the Chief Executive Officer instead of the assembly of African organisations.

Phillips said the GY$68 million dollars that have been allocated to IPADA-G should be used to create a college of African village leaders “together to discuss the biggest fear which is about losing the next election”. General elections are due to be held in 2020.

He charged that five individuals “who were never in the fight” “are screwing us royally” at a time when the African community was getting nothing. Wendy Hermonstine said a situation exists where people, including overseas-based Guyanese. were gravitating to power and prestige, leaving behind intelligent, knowledgeable and forthright people. “We had a lot if ‘comebackees’ (re-migrants) and people who were not not here don’t know what is happening here,” he said.

IDPAD-G has come in for some criticism by the PPP in the National Assembly over government’s allocation of funds for running its Secretariat.