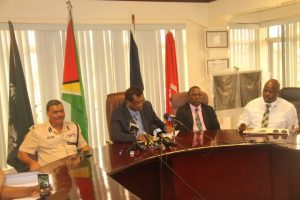 Three Guyanese remain in police custody in Guyana and two others are being held in Suriname by police there as a probe into last month’s deadly piracy attack continues, authorities here said Wednesday.

Guyana’s Police Commissioner, David Ramnarine and Minister of Public Security, Khemraj Ramjattan said the detainees in Guyana could be charged and prosecuted locally instead of being sent back to Suriname to face trial. “There are methods if they request them, in my opinion, send them across. Murder is an offence with a jurisdiction that is international and I do not know all the legal courses that could be taken but I rather suspect that even if we don’t we could charge them here in Guyana and ask that the witnesses to come across,” said Ramjattan, a lawyer by profession.

On the question of how the two or eventually more Guyanese would be sent to Suriname in the absence of an extradition treaty, the Police Commissioner noted that Guyana’s anti-piracy act allows for the trial locally of persons who are accused of committing the offence in another country. “Our anti-piracy legislation provides for persons to be charged here in Guyana was committed in another territorial jurisdiction and we have used that legislation in the past successfully,” he said.

Ramjattan said in response to a request, Suriname is expected to dispatch a translation of the statements law enforcement agencies there have obtained from persons questioned so far. He said, according to information from the eastern neighbour, 30 persons had been detained and then that number had been subsequently reduced to 12 and later two who are regarded as “prime suspects”.

Authorities in Guyana and Suriname continued to work on the theory that the April 27 piracy attack on five boats with a total of 20 fishermen off Suriname’s east coast appeared to be a reprisal for a drive-by shooting in March 30, 2018. “The evidence was pointing to a retaliation for that murder that happened on the 30th March by these relatives of that murdered man,” Ramjattan added.

The Minister of Public Security said the Surinamese Minister of Defence was keen on cultivating intelligence sharing with the Guyana Police Force and pledged to hold joint police and coast guard patrols. Part of the solutions to piracy, he said, was the need for persons not to engage in reprisals and for Guyana to beef up its aerial monitoring and coast guard patrols. Monies have been budgeted to purchase drones in 2018, and already the Guyana Defence Force is moving to purchase several planes. “We need to ensure that our borders are properly surveilled and monitored…These are things that could create the necessary deterrent effect but the greatest thing is the people themselves. When they get the information that because of what might happen, there might be a tit-for-tat and then they come and warn the police so that we can take precautionary measures and preventative measures but if they just remain silence, as I have said before silence then becomes violence,” he added.