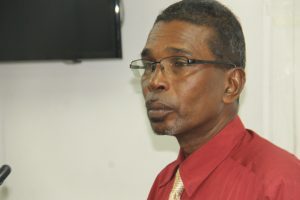 A then 15-year old boy told police that he was present when the Rondell ‘Fineman’ Rawlins gang shot and burned eight gold miners at Lindo Creek, Upper Berbice River in June 2008.

That is according to a caution statement by Dwayne “Small Friend” Williams who is implicated in several murders.

Williams, who is currently on remand, told Superintendent of Police Trevor Reid in July 2008 that the Fineman gang had tied up the miners. Williams, of Vigilance Squatting Area, said shots were fired and the eight men were killed. He said Cecil “Magic” Ramcharran threw gasoline on a tarpaulin, set it alight and burned the men.

After that incident, he said Fineman, Magic and Chung Boy walked away and left him.

Williams said he later boarded a grader with a trailer, and subsequently a truck.

Attorney-at-Law for the Commission of Inquiry, Patrice Henry suggested to Superintendent Reid that Williams was an “alleged eyewitness to the killing” . “I think the statement speaks for itself”.

Reid noted that Williams said he heard shots but there was no mention on who would have shot.

The police officer said the media’s version that soldiers had killed the gold miners was different from Williams’ account in his caution statement.

Williams testified in high profile cases such as the Bartica massacre.

According to Williams, he had accompanied the gang members for more than one night. During that period, they had used a makeshift flotation device to cross the Berbice River to Lindo Creek.

Reid said based on his experience, the probe appeared incomplete. “As an investigator, much more work needed to be done and this (Commission of Inquiry) what we are doing would not have been necessary,” he said.

The presidential Commission of Inquiry is  being conducted by retired Justice Donald Trotman.