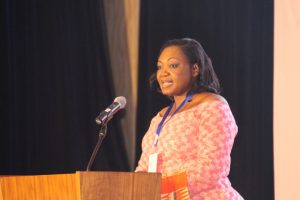 World Press Freedom Day 2018 – the global event- was launched Wednesday in Accra, Ghana with a call for policymakers to recognise that offline laws are generally as good as Online laws.

That call was issued by the Senior Policy Manager of the World Wide Web Foundation, Nnenna Nwakanma in her keynote address to a plenary session on “Media Under Fire: What are the new challenges to press freedom 27 years after the Windhoek Declaration”.

Her call comes at a time when Guyanese are engaged in heated debate over the Cybercrime Bill that provides for offences such as sedition if the government of the day considers expressions Online by anyone to be offensive.

Governments must stop internet shutdowns – shutting down the internet is sledgehammer censorship of all public debate and journalism at once. When you shut down the Internet, you tell us that you are not a government to be trusted. You scare away investment and investor, and you mobilize us citizens, to vote against you. It is time to move beyond Military Democracy.

Also an Advisory Council member of European Digital Rights – EDRi, Nwakanma also cautioned governments against limiting the scope in which people can express their views freely.  “We face Government crackdown on free expression, and increasingly draconian laws shrinking civic space in Malaysia, in Myanmar and not too far from here,” she said.

Nwakanma urged an ongoing fight to keep information flowing and  the web free and open for the next 50% of the world’s population. “Traditional media, new media, online platforms and digital rights face the same threats,” she added.

Nwakanma, who is also a board member of  Pen+Bytes-a Media organisation that works for the enhancement of governance through citizen participation- cited the need for factual information instead of fake and false news driven  in part by the advertising incentive to write clickbait.  “It is only when  information is credible and reliable that papers and platforms will only truly empower people,” she said.

She also highlighted that in many parts of the world, people do not get information to hold those in power accountable. “We are also challenged by the unreached and unconnected populations who become increasingly marginalised and unable to exercise their right to access information and hold the  powers to be accountable,” she said.

In Guyana, thousands of people-mainly Amerindians near bordering countries- do not have access to  local newspapers, radio and television. In recent times, some of that has changed with greater Internet access and small government-owned and controlled radio stations.

The Guyana Press Association is due to formally raise its concerns about the Cybercrime Bill with government, opposition and other stakeholders.

Critics say the Cybercrime Bill seeks to limit free speech by stating that  a person commits an offence of sedition if the person, whether in or out of Guyana, intentionally publishes, transmits or circulates by use of a computer system, a statement or words, either spoken or written, a text, video, image, sign, visible representation, or other thing, that (a) brings or attempts to bring into hatred or contempt, or excites or attempts to excite disaffection towards the Government established by law in Guyana”.

The legislation, if passed, will prohibit disaffection includung disloyalty and all feelings of enmity”. At the same time, the Bilk allows  “comments expressing disapprobation of the measures of the measures of the Government with a view to obtain their alteration by lawful means, without, exciting or attempting to excite hatred, contempt or disaffection” and “comments that point out errors or defects in the Government, Constitution or Parliament”.