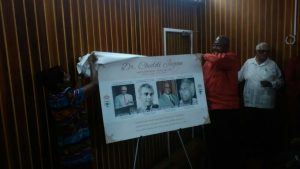 The Ministry of the Presidency (MotP) and the Guyana Post Office Corporation (GPOC) on Tuesday formally launched the Centennial ‘limited edition’ Commemorative Stamp in celebration of the life of the Late Executive President of the Cooperative Republic of Guyana, Cheddi Jagan.

Notably absent from the launching ceremony held at MotP was any representation of the Peoples Progressive Party (PPP), government ministers, President or Prime Minister.

Post Master General, Reverend Murtland Massiah, addressed the small gathering including the late Dr Jagan’s sister, Barbara Fries, and said while there was a ‘glitch’ in the launch of the stamp honouring Dr Jagan’s life, today’s activity serves to be much more meaningful.
“Now rather than just a presentation and a launch that would have honoured him in a way that would only have reflected his work in a partial manner, we are now witnessing a launch that is truly reflective of his life and work being honoured by this nation.”

Dr Jagan’s former Aide de Campe (ADC), during his presidency—currently protocols officer at MotP, Colonel Francis Abrams, in reflecting on the occasion said commemorative postage stamps are often issued on significant dates and are further made available only in limited quantities. “More often than not they become collector’s item,” Colonel Abrahams said, as he noted that former President Jagan was one of the architects in national liberation struggles and someone who was at the forefront of the fight for Guyana’s Independence.

He also recalled that Cheddi Jagan Research Centre (CJRC) had initiated the process to have a special stamp printed to mark Dr Jagan’s 100th Anniversary in March last, “unfortunately the stamp was not launched to coincide with 100 birth anniversary as was intentioned.”

Colonel Abrams contends however “this does not make this day less significant.” He said it “was always government’s position, Cheddi Jagan would be honoured in recognition of his National Service.

He said the launch of the stamp was not simply a local a postal event but would have had the approval of national awards committee, “as these stamps are also national symbols.”

Chairman of the Cheddi Jagan Research Centre—which had originally collaborated with GPOC for the production of the stamps—Hydar Ally, despite the hurdles along the way the it is “with great pleasure and great humility that we participate this afternoon in this launching. Ally is an executive member of the opposition People’s Progressive Party whose General Secretary, Bharrat Jagdeo had said that his party would not have been represented at the event because no one had been invited.

The simple ceremony at the Ministry of the Presidency also saw in attendance GPOC board members as well as staff of CJRC and the local philatelic society.

Following an unveiling of a replica, CJRC was presented with the first cover edition of the stamps—on sale across the country from tomorrow.