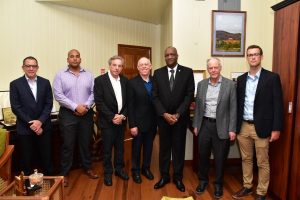 United States-headquartered warehouse club, PriceSmart, is planning to set up shop in Guyana due to expected economic boom as a result of oil production in another two years, a senior company official said.

Price and other board members were in Guyana on Thursday when they met with Minister of State, Joseph Harmon and other officials to explore opportunities for investment.

In welcoming the team to Guyana, Minister Harmon, who met with the team during a break from this week’s Cabinet meeting, said that Guyana remains open for business and Government will continue to ensure that the right conditions are put in place to promote Guyana as an investment destination.

Harmon reportedly assured Price and his colleagues that government would do its best to facilitate PriceSmart’s entry to the Guyanese market. “I want to welcome you and you will find that while we are not as advanced as the other countries where you operate, you will find a willingness on the part of our people to work with you and on the part of the Government to create favourable conditions for businesses to succeed,” he said.

Price was accompanied by his son and President of the company,  David Price, Executive Vice-President, Brud Drachman, Leon Janks, Board Member and their local contact, Mr. Andron Alphonso.