No salary increases for teachers as yet; recommendations with Finance Minister—Granger 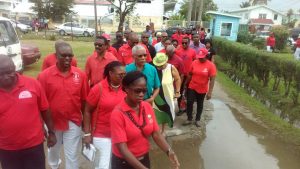 Teachers will now have to await word from the Ministry of Finance, on any increases in wages and salaries and other remuneration to be afforded public school teachers.

This was confirmed on May Day-Tuesday, May 1- by Head of State, President David Granger, when he met with Guyana Teachers’ Union (GTU) President, Mark Lyte, General Secretary Coretta McDonald and other senior teachers on the first stop of his May Day visits to union headquarters across the City.

GTU had proposed an initial 40 per cent across the board, increase for last year and 50 per cent increases annually up until 2020 for all categories of teachers. It is unclear what recommendations were submitted by the task force—currently with the Ministry of Finance.

The GTU President ahead of a short meeting with the President Granger and the GTU Leadership, said the excitement among teachers was a result of word of an announcement to be made by the President. 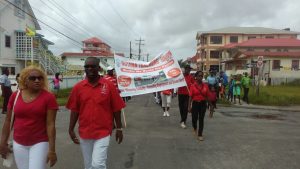 President of the Guyana Teachers’ Union, Mark Lyte leads his contingent on the May Day march through the streets of Georgetown.

“The teachers are very enthused about your presence here…last year we had a similar turn out but they were a little mixed with their emotions, I think this year they seem to have high expectations of something being announced shortly, I guess that is the reason for all this excitement this afternoon,” Lyte told President Granger to which he responded “My brother you know my heart is in the right place.”

After hesitating somewhat, the President was asked pointedly by Demerara Waves, on the status of the negotiations regarding teachers’ wages and salaries.

According to President Granger, the Ministry of Finance is examining the outcome of the Presidential Task-force.
After the GTU walked out of pay talks with the  Minister of Education on October 26, 2017 and announced that teachers were going to strike, one day later government had said that the pay offer of between half a percent and eight percent had been an interim offer and a task force  had been established by President Granger. After several meetings, that task-force presented its final recommendations handed to  the Minister of Education on April 6 last.

The Guyana Trades Union Congress to which the GTU is affiliated is on record as saying that the presidential intervention in the pay dispute is not in keeping with the collective bargaining process between the union and the Ministry of Education between whom there is a Collective Labour Agreement for the avoidance and settlement of disputes.