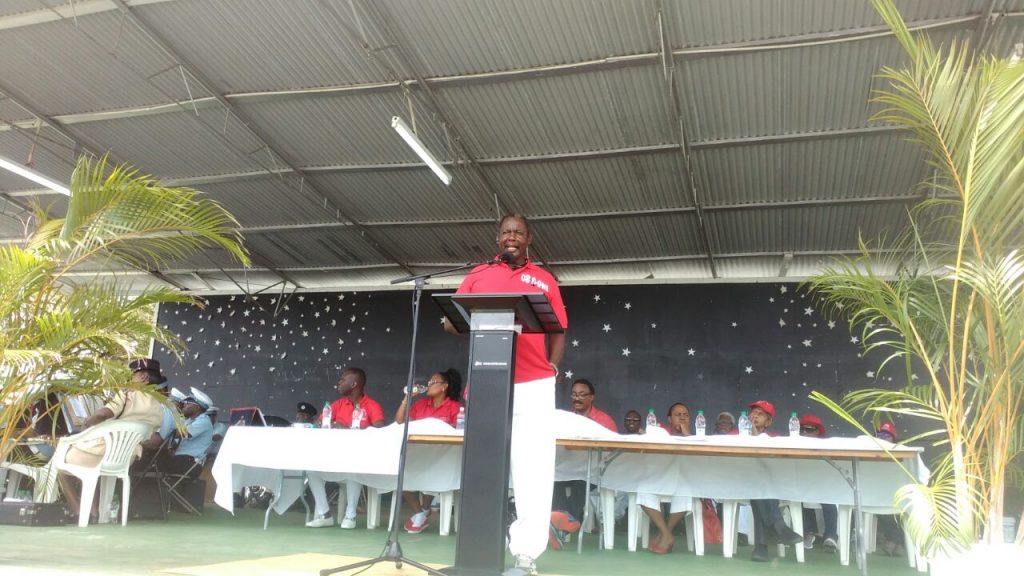 GTUC General Secretary, Lincoln Lewis addressing the May Day 2018 rally. He shared the head-table with, among others, Attorney General and Minister of Legal Affairs, Basil Williams and General Secretary of the Guyana Agricultural and General Workers Union, Komal Chand.

General Secretary of the Guyana Trades Union Congress (GTUC), Lincoln Lewis on May Day- Tuesday, May 1- urged the opposition People’s Progressive Party (PPP) to sponsor a parliamentary motion calling for the re-establishment of a Ministry of Labour.

Addressing the May Day rally, the veteran trade unionist also expressed concern that the Guyana government has not participated in any of the International Labour Organisation (ILO) conferences for the past three years- the same period over which the Ministry of Labour was scrapped by the David Granger-led coalition government.

“The absence of a Ministry of Labour not only signals the value government places on a country’s most valued resource but also communicates to allies and foes of Guyana that Guyanese are not considered pivotal to the country’s development, and such perception is reinforced with the country’s non-attendance to International Labour Organisation Conference for the past three years,” Lewis said.

Since coming to power in May 2015, the APNU+AFC-led coalition administration has instead established a Ministry of Social Protection whose junior minister, Keith Scott, is responsible for labour matters through the Department of Labour, Occupational Safety and Health.

However, the GTUC General Secretary said that was insufficient and he called on PPP parliamentary spokeswoman on labour, Gillian Burton-Persaud to sponsor a motion in the National Assembly for Guyana to once again have a Ministry of Labour.

His call for Burton-Persaud’s help came almost in the same breath in which he praised then Shadow Labour Minister, Basil Williams who had supported the GTUC financially and with legal services while he had been in opposition.

“It is fitting that today we implore on you to bring a Motion to the House seeking the re-establishment of the Ministry of Labour. Labour is prepared to work with you to bring this to fruition and hopes you take this commitment in the spirit of solidarity,” the GTUC General Secretary said in referring to Burton-Persaud.

Lewis said he also hoped that Williams, who is now Attorney General and Minister of Legal Affairs, would urge the rest of the political executive to once again dedicate a ministry to labour. “Labour holds out optimism that Minister Williams would be able to use this experience in impressing on his administration the wisdom of having a Ministry of Labour and the benefit of treating Labour as Social Partner consistent with Article 38 and 149C of the Guyana Constitution,”: the trade unionist said.

Lewis said for over 15 years members of the Guyana Public Service Union have been deprived Collective Bargaining, nine years for workers in the Bauxite Company of Guyana Incorporated and the Guyana Teachers Union is still to sign an agreement that flows from Collective Bargaining. “Workers face clear and present threat of losing what is constitutionally protected and guaranteed. The public sector, bauxite and sugar sectors are battling to have respected the gains inherited from our predecessors,” he added.

Meanwhile, the GTUC boss also lashed out at government for excluding the opposition and the trade union movement from the the launch of a commemorative stamp for late co-founder of the opposition People’s Progressive Party (PPP), Dr. Cheddi Jagan. 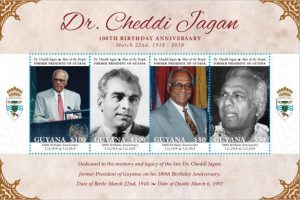 However, Lewis argued that Jagan “belongs to all of us” because trade unionism was springboard to politics. ” It struck me the party Jagan came from- its General Secretary- said the PPP/C was not invited to this function. Jagan belongs to all of us and this event could have honoured it.

Labour too can rightfully claim him- though we not invited to the event. It was in the trade union movement Jagan cut his teeth for public life. Before he was a politician he was a trade unionist  and the trade union principles in no small measure shaped his politics and activism,” said Lewis in his address to the May Day rally.

Opposition Leader, Bharrat Jagdeo has expressed surprise that government did not invite him or his party to the launch of the Cheddi Jagan stamp to commemorate the 100th birth anniversary of that renowned Guyanese politician. Jagdeo has already said that even if he or his party is invited was invited at the ’11th hour’, no one would be attending the event to be held at the Ministry of the Presidency on Wednesday.

“Obviously they don’t want us there,” Jagdeo has already reasoned and pointed to the May Day holiday.

The  Ministry of the Presidency in March of this year nixed plans by the Guyana Post Office Corporation (GPOC) and the Cheddi Jagan Research Centre to issue the centenary commemorative stamps, saying national symbols would be announced at a subsequent time, to commemorate the lives of both Jagan, and late President, Arthur Chung—Guyana’s first President.

This MotP at the time said, will be done “within the content of set criteria for honouring eminent Guyanese.   “President David Granger said that the Cabinet has taken a Decision that the Commemorative Stamps which are national symbols, must adhere to national criteria….(national) symbols must not be used for private, partisan or political messages, but ought to be used for national purposes.”

The move by the Granger administration had set off a a political fall-out with the PPP an the Cheddi Jagan Research Centre alleging political interference.

This year marks the centennial birth anniversaries of both Presidents Jagan and Chung.

2018-05-01
Denis Chabrol
Previous: Prison wardens detained for throwing bag over Lusignan Prison fence
Next: No salary increases for teachers as yet; recommendations with Finance Minister—Granger