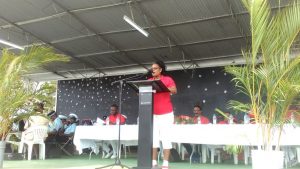 The Guyana Trades Union Congress (GTUC) is calling for an urgent investigation into the operations of the Department of Public Service, alleging favouritism and cronyism at the Ministry of the Presidency (MotP) and its treatment of employment in the public sector.

The public demand was made on May Day 2018, by Karen Vanslutyman-Corbin, of the GTUC’s Women Advisory Committee (WAC) , in her address to public servants gathered at the National Park in Georgetown for the annual Labour Day event.

Vanslutyman-Corbin made the fiery presentation to Ministers of Government, Basil Williams SC., Keith Scott, Karen Cummings, Annette Ferguson and Simona Broomes among other union leaders and public servants gathered for May Day 2018 under the theme, ‘Advancing Solidarity; Promoting Employment and Descent Work.’

According to Vanslutyman-Corbin, “I believe there is urgent need for investigation to be launched into the operation of the Department of Public Service.”

The Department of Public Service, she said, “ought to be functioning in the benefit of all public servants. It is not happening.”

She charges it is instead, “functioning for some public servants, the friends and cronies of a few and I’m saying it and I have the evidence to support it…I’m asking our national leaders to please look into that because it is happening…please look into that.”

The Department of Public Service is headed by Reginald Brotherson, and falls under the auspices of the Ministry of the Presidency. Brotherson could not be reached for comment.

Attorney General and Minister of Legal Affairs, Basil Williams SC., did not respond to the public charges levelled by Vanslutyman-Corbin in his feature Address to the May Day 2018 Rally.

In a direct appeal to the Public Servants—who had earlier marched in a procession through the streets of Georgetown—she stated that “today is a day when we as workers celebrate our achievements and highlight to our national leaders and our trade unions leaders, issues and concerns affecting us.”

That, she said, is done “with a view that the issues that we highlight will be placed on the National Agenda aimed at improving the general working conditions of us as workers.”

2018-05-01
Writer
Previous: No salary increases for teachers as yet; recommendations with Finance Minister—Granger
Next: ‘Produce the evidence’ of favouritism in public service- PS Brotherson to GTUC’s Vansluytman-Corbin