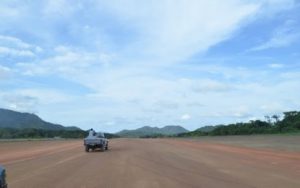 Hinterland airstrips will soon be bright and easily accessible at nights with use of rechargeable lights that will better facilitate use by aircraft at nights.

For years, insufficient lighting on several hinterland airstrips has significantly hindered flights entering and leaving the hinterland regions at nights, especially during emergencies. Recognising that, Minister of Public Infrastructure, David Patterson said efforts are ongoing to have rechargeable lights available on all hinterland airstrips.

The minister made this disclosure at a recent meeting with regional officials during a visit to Cuyuni Mazaruni, Region Seven. He explained that this intervention will aid in alleviating the longstanding challenges faced by residents, and provide adequate lighting on the airstrips.

“These rechargeable bulbs that can stay lit for hours, no power is needed just put them in the holders and they stay lit for four hours and that’s just enough time for the plane to come and leave. So, we’re looking at that for all the airstrips. They’re simple and effective”, Patterson was quoted as saying by government’s Department of Public Information.

The Public Infrastructure Minister pointed out that containers for the lights will be constructed shortly, and a caretaker will be hired to maintain and recharge the lights. He added that there are already receptacles for the lights along the airstrips. “This is a practical solution which works well for pilots as well, so, we definitely have to work to make it a reality”, Minister Patterson reiterated.

Supporting this initiative was of Regional Chairman, Region Seven, Gordon Bradford. “We have critical moments when we have to evacuate cases, from the hospital in the night and we have to do it by calling out citizens to shine the lights from their vehicles for the aircraft to land. The air trip is now used frequently so we definitely need to look at upgrading it and installing lights.”

In an effort to guide the continued transformation and modernisation of the aviation sector, $250M was provided in the 2018 Budget to improve airstrips and aerodromes across the country. From this amount, $140M will be used to commence the rehabilitation of airstrips at Bemichi and Kamana. Another 12 airstrips across the hinterland region will be rehabilitated at a cost of $110.3M.

There are 57 licensed government airstrips in Guyana. From this amount 47 are maintained by the Aerodrome department of the Ministry of Public Infrastructure while the remaining 11 are maintained by the villagers in their respective locations. However, inspections are conducted on a regular basis to ensure that they comply with standards outlined by Guyana Civil Aviation Authority.