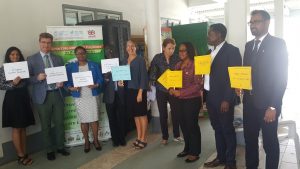 United Kingdom High Commissioner to Guyana, Greg Quinn (second from left) and Minister of Public Health, Volda Lawrence (next to him) accompanied by other SMART Hospitals stakeholder representatives

Several of Guyana’s publicly owned hospitals are being upgraded to make them more resistant to floods and storms caused by climate change, as part of a United Kingdom (UK)-funded project that targets seven Caribbean countries, officials said Friday.

The UK’s ‘s Department for International Development (DfID) is financing the regional SMART Health Care Facilities Project to the amount of 38 million pounds sterling.  In addition to Guyana, the other beneficiary nations are Belize, Jamaica, St.Vincent and the Grenadines, St.Lucia and Dominica.

The retrofitting of the hospitals in Guyana and the rest of the Caribbean will include strengthening roofs and structures, improving drainage, installing hurricane shelters, improving access, and  improving power supply, safety and efficiency.

In Guyana, the project is being implemented by the Pan American Health Organisation (PAHO) and the Ministry of Public Health. “A safe hospital is one whose services remain accessible and functions at maximum capacity in the same infrastructure during and immediately following the impact of a major emergency event,” PAHO Representative in Guyana, Dr. William Adu-Krow said.

“It’s designed to make the health facilities across the Caribbean more efficient and more resilient to natural disasters,” said the UK’s High Commissioner, Greg Quinn, against the background of last year’s two devastating hurricanes- Irma and Maria- as well as violent high tides that broke away a section of the Uitvlugt Seawall and flooding several villages and the Leonora Cottage Hospital.

The exact amount of cash allocated to Guyana is not yet known because authorities have to finalise the estimates for each hospital- Diamond Diagnostic Centre, Mabaruma Regional Hospital, Leonora Cottage Hospital, Lethem Regional Hospital and Paramakatoi Health Centre- to be retrofitted. When completed by May 2020, the cost of water and electricity is expected to decline and, according to Adu-Krow, about US$2 million over 20 years will be saved and re-injected into the maintenance of those same health care facilities.

Of the 71 health care facilities throughout Guyana that were checked by applying the Health Safety Index, none scored ‘A’, while only three – Materials Management Unit pharmaceutical bond at Diamond, Enmore Clinic and a health facility at Number 56 Village, Corentyne- were marked ‘B’ and the remainder ‘C’. “These (assessments ) showed that almost all needed improvement to avoid damage and meet the demand for services during and after any unexpected events,” Quinn said.

Minister of Public Health, Volda Lawrence hailed the SMART Hospital Initiative as one that has been designed to provide the health sector “with increased protection against disasters to which the region is prone and further provide protective cover against the vagaries of climate change”. She said the Grade ‘C’ in reality means that most of the 71 health facilities are unsafe in a disaster period. “Put forthrightly, the hospitals’ current safety levels are inadequate to protect the lives of patients and staff during and after a disaster. Since none of them obtained the minimum score required to be classified  as a green facility, then all must be retrofitted,” she said.

Lawrence said that except for Leonora and Diamond, the other hospitals will be able to take advantage of renewable energy sources. In recent years, storms have wreaked havoc in Guyana’s interior, destroying homes and other buildings.