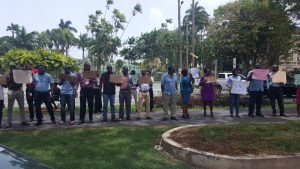 Junior and senior managers of the state-owned Guyana Power and Light Inc (GPL) Wednesday afternoon picketed the Main Street commercial office, claiming that the executive of the power company breached an understanding on allowances and other benefits.

Union Branch Chairman, Walter George told Demerara Waves Online News that while the union’s negotiators and executive management had eventually agreed to a 3.5 percent salary hike, down from an initial demand of five percent.

George said that the agreed reduction was based on the company’s development plans from 2017 to 2021.

He said since February 12, 2018, GPL’S executive failed to meet with workers representative to conclude talks on outstanding matters.

“They are protracting this meeting. They are ignoring us despite the fact that we wrote them two letters,” he said, adding that one of the letters was written on March 13 and another on March 19.

The union representative charged that GPL’s Human Resources Director, who is the primary negotiator, appeared less than enthusiastic to meet with the union.

George further charged that the Human Resources Director drafted an agreement that was contrary to the mutual position arrived at on February 12, 2018.

He explained that meal allowances for non-shift workers was GY$1,1350 but the Human Resources Director proposed GY$1,200; overtime work in multiple of six hours should attract a meal allowances but management changed that to 10 hours.

“This is bad faith negotiations,” he said.

The union is demanding that GPL”s recently appointed Chief Executive Officer meet with its representatives.

George preferred to offer a wait and see approach as regards any likely impact that escalated industrial unrest could have on electricity supply.