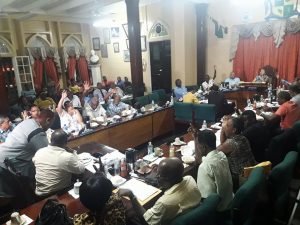 City Councillors voting in favour of proposed amendments to the parking meter contract between the Georgetown Mayor and City Councilors and Smart City Solutions on January 17, 2018.

Georgetown’s Mayor and Councillors voted by majority 15-4 for the metered parking contract with Smart City Solutions to be amended to pave the way for a reduction in parking fees to GY$150 per hour including or GY$800 for eight hours.

Town Clerk, Royston King, however, told Demerara Waves that the new fees would not take effect until another few months after the amended contract with Smart City Solutions (SCS) is signed and new related bylaws are crafted and signed into operation by Local Government Minister, Ronald Bulkan. He did not foresee a pending case against the parking meter contract adversely impacting on the restart of metered parking.

Two A Partnership for National Unity (APNU)-aligned councillors Alfred Mentore and Gregory Fraser- abstained. Fraser later said he did not receive guidance from his party on how to vote and Mentore, during council’s deliberations, said he needed more time to meet with his constituents to discuss the implications of the contents of the negotiating team’s report which he received only Tuesday evening at about 6:15 PM. “The mad rush to push through this is what I am concerned about,” he said.

The majority support by APNU-affiliated councillors was registered despite strong calls by the Alliance For Change (AFC) and the People’s Progressive Party Civic (PPPC) councillors for the contract to be scrapped altogether.

Nine months ago when central government suspended the parking meter bylaws amid widespread public outcry, including weekly street protests by Movement Against Parking Meters (MAPM), the rates had been GY$250 per hour after it had been reduced from the original rate of GY$570 per hour for fixed parking spots.

Motorists would be required to pay for time that can be used at any of the designated parking areas instead of parking spots.

The agreement reached in the negotiations, according to Head of City Hall’s negotiating team, Akeem Peter, also extends the period from 30 days to 60 days during which SCS could sell vehicles at public auction after a 14-day notice if motorists fail top pay up after three violations

Under the amended deal, local government vehicles and vehicles owned by local government officials would be exempt from paid parking. Residents would be given colour coded parking cards to allow them to park their vehicles within a given street block from 5 PM to 7PM. If they park outside of their residential zones they would have to pay the usual rates.

With regards to public and private schools and places of worship, Peter said they would have to apply to SCS for exemptions.

Peter said the 20-80 gross revenue share would remain after they were advised that it would be more advantageous to do so rather than accept SCS’ 50-50 share of net earnings. “It will give them an opportunity to inflate expenses or add expenses on to,” he said. Peter said when the company takes out its operational expenses, it will actually be earning 30 percent of the revenue and City Hall 20 percent.

The duration of the contract will be 20 years with automatic right to renewal.

Deputy Mayor, Lionel Jaikarran, in a prepared statement, restated his AFC party’s historical position that the contract, which was  signed on May 13, 2016, is illegal because it was at no time presented to the Council or voted on.  Saying he was not opposed to paid parking as a means of traffic control.  “I, like many of you out there, I abhor the traffic madness that we experience everyday on a daily basis, whether you are a driver or commuter. We need help…but I believe that the parking meters, coupled with better traffic management with the Guyana Police Force. What I don’t believe is that Smart City Solutions is the solution to our current traffic woes because they lack transparency and their grossly unfair 80-20 split,” he said.

PPP Councillor, Bhisham Kuppen expressed concern about the entire deal and specifically lamented that City Hall’s negotiating team has given away much needed revenue by agreeing to absorb six months of salaries of GY$78,000 each for City Police and other personnel to enforce the bylaws.

“This is an illegal contract and it should be revoked,” Kuppen said. His fellow PPP Councillor, Kame Sharma contended that the contract was aimed at satisfying Council’s need for GY$120 million in revenue. ”

The Chief Parking Meter Negotiator said a joint City Hall-SCS oversight committee would be established to review the operation of the metered parking system twice per year for the next three years.