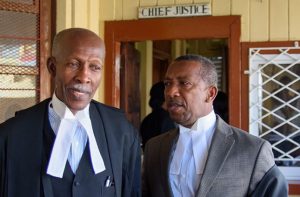 Williams said it was partly a politically motivated decision because the locally available Senior Counsel were not in the coalition government’s camp and a number of lawyers have been representing persons in the opposition.

“You had no Senior Counsel that you could say you could look at and retain who had not been retained for the last twenty-three years under the PPP and…we have a mass-based party and they ask questions so it is difficult for you to explain to them when you see a lawyer- like when Mr Nandlall was charged you saw several lawyers representing Mr Nandlall- it will be difficult to answer them when the same lawyers are to come and represent us in important matters,” he said.

The Attorney General declined to say how much Barbados Queen’s Counsel Ralph Thorne and Hal Gallop would be paid to represent the Guyana government in the case of Zulfikar Mustapha vs the Attorney General over the President’s unilateral appointment of Retired Justice James Patterson as GECOM Chairman despite Opposition Leader Bharrat Jagdeo’s submission of 18 names. “I don’t know if I could disclose the people business like that…I am saying that at the right time I could indicate that to you but I am not sure it is appropriate; perhaps I could do it in Parliament, the question could be asked in Parliament,” he said.

The then People’s Progressive Party Civic (PPPC) government, he said, had “brutalised” the legal system because 20 years ago appointed a few Counsel but since then none of them had included those who had “appeared to be in opposition” and a few lawyers had been hired to represent government.

After pointing out that during the PPP’s tenure several lawyers from Trinidad and Tobago, and Jamaica had been hired to represent the then Guyana government, he said nothing was wrong if the coalition government also did so especially due to insufficient lawyers in Guyana. “It is a healthy thing for us in Caricom to be able to visit each other’s territory and share jurisprudential positions; you know it could only serve to enrich the jurisprudence not only in Guyana but in the region as a whole,” he said.

The PPPC contends that Guyana’s constitution obliges the President to select one of the Opposition Leader’s nominees to ensure there is a delicate balance between the three opposition and three government-nominated members of the Commission.