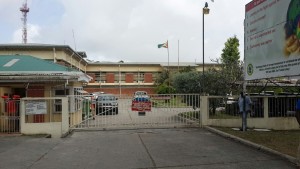 The Guyana Lands and Surveys Commission (GLSC) on Tuesday said it is collaborating with relevant agencies to ensure that dirty money is not laundered to lease large tracts of State land, even a it works towards fast-tracking the processing of land applications down to three months.

Chief Executive Officer and Commissioner of the GLSC, Trevor Benn said his semi-autonomous agency was working “very closely” with the Special Organised Crime Unit of the Guyana Police Force and the Financial Intelligence Unit to screen land lease applicants who conduct large cash transactions. “We are following the anti-money laundering law in relation to large sums of money being paid over in cash, for example, by our prospective lease holders,” he said, adding that “we are on the look-out” despite the fact that “we are paper-based”.

Demerara Waves Online News has been told by well-placed sources that a well-known businessman, who was recently under the radar of US investigators, has been awarded hundreds of acres.

He added that unless there is good reason, persons could not be blacklisted based on newspaper reports but on concrete information on SOCU and FIU. “We don’t process those applications,” he said when asked if FIU and SOCU advises the GLSC what is done.

The Lands and Surveys Commission boss said so far no leases have been scrapped or applications blocked as a result of financial crimes. “Since we have been  here we have cancelled a number of leases, not necessarily for suspicious reasons; most of them is for non-beneficial occupation… not for anti-money laundering issues…We have not repossessed any land for anti-money laundering,” he said. Benn appealed for some time to allow the Commission to uncover any land that has been leased to persons engaged in suspicious activity.

Also, in the area of illegality Benn said nothing could be done to withdraw leases that had been granted as a result of bribery and other corrupt practices to the staff. “Once the process has been followed, even if it was an induced process, once the process has been followed and a lease was issued by the proper authority, it’s a lease at the end of the day. Even if it was induced, we don’t have the benefit of knowing at what point that may have happened, if it happened,” he said.

Benn acknowledged that there has been a lot of talk about persons having paid unofficial sums for the processing of lease applications “Once the process, however, was followed and lease issued by the competent authority, it has to be respected,” he said.

The Lands and Surveys Commission is working on several initiatives including the training of staff at the University of Guyana; the opening up of new areas for development for the first time since the late 1960s /1970s when the Linden-Soesdyke area was released as well as the processing of lease applications dating back to the 1980s.

Benn said the Lands and Surveys Commission was at the same time taking steps to repossess lands for failure to beneficially occupy or use them or pay their fees. He singled out a situation at Mocha, East Bank Demerara where more than 1,000 acres were leased to four businessmen but none of the land was occupied four years later.

“We took back the land and we are about to give to the residents of Mocha over 200 house lots which they are clamouring for because they really need it, together with other agricultural lots,” he said, adding that the residents would be getting one acre each, instead of a 40 X 60 house lot from Central Housing and Planning Authority that would allow them to have a proper house and a kitchen garden.

He conceded that the process takes too long to acquire land, but said that was no reason to justify squatting.

Plans are also in train to review the laws governing land surveyors to ensure a high quality of service is delivered to Guyanese.

With regards to the financial health of the Lands and Surveys Commission, the Commissioner said when he took up office almost two years ago the entity had over GY$188 million outstanding, but now it has more than GY$200 million the bank even after spending on several projects. “We now have a more rigorous system in collecting our revenues and accounting for it,” he said. He said for this year alone, the Commission has raked in GY$900 million odd, with some being spent on several areas.

2017-12-19
Denis Chabrol
Previous: See your imprisonment as your opportunity to get right back up – Director of Prisons tells prison graduates
Next: Two-headed still-born baby delivered at New Amsterdam Hospital