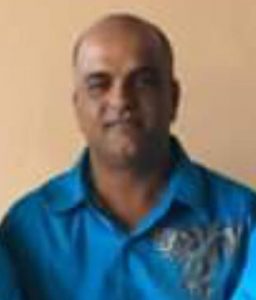 A Rose Hall Town businessman was shot and injured by bandits who masked themselves with motorcyclist helmets, sources said.

He is 47-year old Bobby Prasad, owner of Bobby’s Boutique.

The two perpetrators arrived on a black motorcycle at about 1 PM and ordered the staff to lie on the floor.

Two shots were fired in the direction of Prasad who was in the cashier box. He sustained a gunshot injury to his abdomen and head.

Prasad was transferred from the nearby  Anamayah Memorial Hospital to the New Amsterdam Hospital where he was undergoing surgery up to late Saturday.

Police hours later said the businessman was shot twice whilst trying to wrestle the firearm from one of the two bandits . “The victim instinctively held onto the armed suspect and tried to disarm him and during the ensuing process received two gunshot injuries to his head and abdomen,” the Guyana Police Force said in a statement.

Investigators were told that one the suspects,one with a firearm brandished and the other dressed in female attire,entered the premises and demanded cash.

Police said they were working on several leads to quickly apprehend the suspects who left empty-handed.