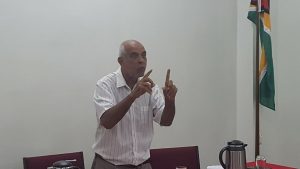 Ramon Gaskin addressing a forum earlier this week at the National Library.

Political commentator, Ramon Gaskin has announced that he is considering forming a labour-oriented political party aimed at radically tackling the basic needs of people and ensure that Guyana gets a fair share of foreign investments especially in the natural resources sector.

“We believe that the new economy and the new model has to be predicated on satisfying needs of people. If you ain’t doing that you are wasting time. The fundamental principle of government is looking after the needs of people. If you get that principle and you do it right everything will fall into place,” he told the second in a series of public engagements held at the National Library.

“I am thinking of having one and I am talking about people whether they think we need to have one…We are tending in that direction to launch this new thing in January,” he said, adding that when a firm decision is taken talks would be held with established and organised parties.

Guiding principles of his  should include integrity, capacity, ability, patriotism, fairness, power and revenue sharing with the 10 administrative regions, abolition of the executive presidency and emphasis on the paramountcy of the parliament and supremacy of the constitution, majority rule, and civilian control of the military.

“I won’t vote for (Bharrat) Jagdeo if he paid me but I ain’t voting for (David) Granger either any longer. We need new political groups in this country to come forward to step forward with new ideas so the people of this country could get proper choices after sixty years of this duopoly,” said Gaskin in referring to the People’s Progressive Party and the People’s National Congress Reform. 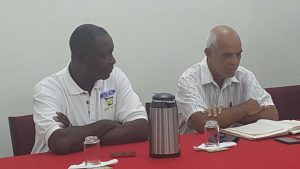 Gaskin, who had accompanied then President Cheddi Jagan in the 1990s to meetings with international financial institutions in the United States, argued that the State needs to play a major role in Guyana’s economic and social development and should include a role for cooperatives.  “We need a  strong state sector and we need state planning and on top of that we need strong regulation of foreign capital in this country. Absolutely, if you don’t get that done, you not going any place,” he said.

Gaskin, who was once associated with the then Jagan-led People’s Progressive Party (PPP), said that party’s founder-leader for not engineering the required changes that he had advocated. ”

The well-known political commentator and financial analyst said his “pro-labour” political organisation would push for a  “new model” that would focus on fighting high rates of homelessness, school-dropouts, crime and malnutrition, all with the sole aim of creating “full employment with decent jobs”.

He flayed economists including Finance Minister, Winston Jordan for merely focusing on growth rates, debt to Gross Domestic Product (GDP) ratio, inflation and macro-economic stability. “We believe that the needs of the people are the number one priority and planning the economy is a necessary corollary of that. Unless you can plan the economy you cant get this done,” he said, adding that many of the ideas have been borrowed from the Barbados-based Caribbean Congress of Labour (CCL).

In his announcement, which coincided with the 100th anniversary of the Russian Revolution on November 7, the avowed Marxist ruled out capitalists being members of his party.

Gaskin indicated that he had no problem with other political parties emerging as in Israel where several small parties occupy parliamentary seats.

He noted that for the past 60 years under PPP and PNCR rule, Guyana has been beset with tax evasion, tax avoidance, low wages, low growth, high taxation, high levels of domestic violence, crime and other security problems, huge backlog of court cases, ethnic differences, school drop-outs, unresolved Guyana-Venezuela border controversy, a split and decline in the trade union movement, and infrequent parliamentary meetings.

“If there is support for it, we will do it in the new year.  We already have in mind a time to do it because these two parties, the duopoly of parties, have failed us after sixty years and there is time for a change from these two big parties,” he said.

He noted that the Police and Public Service Commissions were either inactive or not cooperating but were not being addressed.

Touching on foreign capital, he lamented that companies such as Omai Gold Mines, Barama Rusal, BOSAI, Baishan Lin, Guyana Goldfields, and Troy Resources continue to exploit Guyana. “The Canadians and the Australians taking away the gold from the country the same way Omai took away 3.7  million ounces of gold and we hardly got anything from it,” he said.

He sent a strong signal to foreign investors that under his political organisation’s government, they would not be allowed more than 50 percent stake especially in the natural resources sector and that they would be heavily scrutinized as is the case in Canada and the United States. “All foreign capital must come under heavy and strict scrutiny and in my opinion they shouldn’t be allowed to come here unless they come in a joint venture agreement with the State especially when it comes to natural resources. You got to come joint venture or you can’t come,” he said.

2017-11-11
Denis Chabrol
Previous: Focus on “science and technology”, not “work under the sun like a mule” – PM Nagamootoo urges Berbice youths
Next: Guyana Medical Mission completes 51 successful surgeries at New Amsterdam Hospital during one week visit