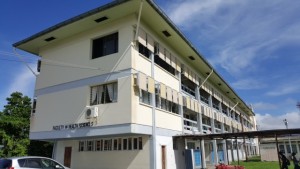 Support staff of the University of Guyana (UG) are set to receive a retroactive salary increase, but lecturers will have to wait for their ‘back-pay’ as the unions continue to reject efforts by the administration to include performance as a condition.

“The administration’s arbitrary insistence on a performance element that applied to only one group of persons (lecturers) resulted in all staff being denied their retroactive payment. The TUC successfully persuaded the administration to let UB staff receive their increase,” the University of Guyana Workers Union (UGWU) and the University of Guyana Senior Staff Association (UGSSA) said in a statement.

The non-academic staff would be paid an eight percent increase retroactive to January, 2017, in keeping with an agreement that was signed at the Labour Department of the Ministry of Social Protection in the presence of Deputy Chief Labour Officer, Karen Van Sluytman.

The unions said academic staff, including those who have been exemplary in their performance, “would have to continue to be held hostage for a while longer while the administration insists on the inclusion of a clause” that includes performance as a prerequisite for getting the salary increase.

The academic staff are due to be paid a six percent hike in wages and salaries dating back to the beginning of this year.

According to the UGWU and UGSSA,  professionals with experience in industrial relations have advised them that such a provision “has no place in a wages and salaries agreement”.

UG Vice Chancellor, Professor Ivelaw Griffith said after the signalled after the signing  of the pay-hike agreement that he would continue to insist on performance. ” “I am delighted that we are able to close this chapter and begin paying the increases. This agreement also sets the stage for a new normal at the university, where performance is just as important as payment, and where accountability and affordability are key to enhancing entrepreneurship,” he was quoted as saying in a statement issued by UG.

Griffith has previously told Demerara Waves Online News that lecturers would first have to submit all outstanding grades before receiving their salary increases.

The Vice Chancellor further stated that wages and salaries were not the only staff-related expenditure that the administration has to cater for. “In terms of affordability, these increases are not our only financial obligations. We still have an average of 4.5 percent merit award to fund, as well as allowances for traveling, entertainment, uniforms, and academic materials. We also have to worry about study leave (salary and housing for three months), sabbatical leave (salary and housing for 12 months), leave passage, and duty allowances for Coordinators, Heads, and Deans”, he said.

2017-11-08
Denis Chabrol
Previous: Berbice goldsmith sentenced to 21 years for killing friend he owed
Next: State Assets Recovery Agency has 25 “solid cases” ; Attorney General says “no protection for anyone in our government and under our watch”