State Assets Recovery Agency has 25 “solid cases” ; Attorney General says “no protection for anyone in our government and under our watch” 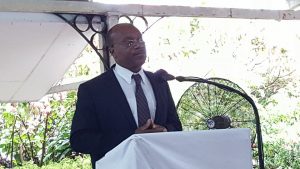 Delivering a brief presentation at an Anti-Corruption Sensitisation Seminar for councillors and employees in Region Four (Demerara-Mahaica) organised by the Ministry of Legal Affairs, he indicated that now that Cabinet has approved the acquisition of office space, lawyers would begin proceedings against those persons.

“At the moment, we have about twenty-five solid cases. We are just waiting to move into a building. We have the lawyers standing by and things will move forward apace but if you are going after large sums of money then the person to whom you are going after also has the capacity to hire some of the best legal brains so if the case is not properly prepared and properly presented, you lose,” said Heath-Retemyer, a retired Major of the Guyana Defence Force

Heath-Retemyer pledged SARA’s commitment: “We will give you justice in good time,” he said. 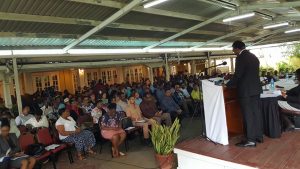 Attorney General and Minister of Legal Affairs, Basil Williams addressing the opening of the anti-corruption sensitisation seminar for all councillors in Region Four (Demerara-Mahaica) held at the Georgetown Club.

Responding to a question by opposition People’s Progressive Party (PPP) City Councillor, Bisham Kuppen about what was being done to remove the perception that only members of the past administration were being targeted, Attorney General Basil Williams assured that wrongdoings by public officials under  the APNU+AFC coalition-led administration would not be covered up. “As Minister, let me say upfront that there is no protection for anyone in our government and under our watch who is involved in any corrupt act. No one is above the law so you could rest assured that with Mr. President David Arthur Granger, you don’t have any excuse. If you are found purloining state assets, the law will take its course,” said Williams.

In his opening remarks, the Attorney General said anyone charged with corruption-related offences must be off the job. “Forensic audits have resulted in charges being laud against purloiners of state assets, who while the criminal charges are pending just stay off the job lest they tamper with, destroy evidence and intimidate witnesses relevant to their charge or any future charges,” he said.

Alluding to an ongoing court case in which a couple has been charged with exporting without a licence 1,907 grammes of raw gold worth GYD$14.6 million, the SARA Director said estimates show that 15,000 ounces of the precious metal had been smuggled out of Guyana weekly. “Since the creation of this agency we have worked assiduously to reduce that amount so that if we can cause less to go we’ll have less to recover,” he said.

He disclosed that SARA agents earlier this week began tracking two pieces of equipment in different parts of Guyana valued at GYD$37 million and GYD$65 million. The agency, he said, has been working with other agencies to retrieve undervalued government property. He said an unnamed person had been renting 100 acres of land at a rate of GYD$100,000 per year. “You can’t get a decent house to rent in Georgetown, small property for that value,” he said.

While young people continue to experience difficulty acquiring house lots, the SARA Deputy Director said agencies were renting land at a rate of GYD$25 per year for a lease of 99 years.

Heath-Retemyer assured that the agency was not on a witch-hunt but simply collecting what belongs to the people of Guyana. “We are not asking anybody for any vendetta. We are simply saying that it is our money- your money and mine- and we want it back,” he said.

“The recorded facts indicate that even those numbers, according to international standards, were still too low,” he added.

Heath-Retemyer said SARA has been working with central government and regions to ensure that recorded inventories show “that you do have what you say you have” as part of the focus on movable and fixed assets including land, money and gold.

Legislative Drafting Consultant, Amanda Dhurjon, in her overview of the State Asset Recovery Act, explained that Civil Recovery is only possible of there is  “cogent evidence to satisfy the court that the property is the proceeds of unlawful conduct of a public official”.

She said if a person can prove to the court that he obtained the property in good faith for value and without notice that it was state property obtained through unlawful conduct, the court will not grant a civil recovery order.

“The act is designed to stem the tide of corruption while at the same time providing for compensation to a person wronged in the due administration of this act. It is hoped that this law administered by worthy officials would lead to a lessening of corruption in public offices and ultimately lead to a corrupt-free public service,” said Dhurjon.

The Legislative Drafting Consultant said the law provides for the court to order someone to provide information or produce documents or grant warrants to enable SARA agents to search and seize material that is likely to be of substantial importance to any civil recovery case.

Dhurjon said SARA must have the supporting evidence to convince the court to grant the required orders. The court must be satisfied that there are reasonable grounds for suspecting that state property obtained by unlawful conduct is on the premises,” she said.

The Consultant said the State Assets Recovery Act provides for proceedings to recover property but not proceedings against the person.