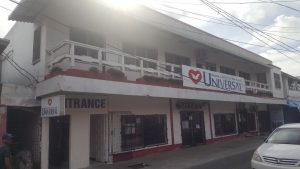 The New Amsterdam Mayor and Town Council  and the Universal Church of God are at odds over the municipality’s decision to block a branch of the church in the town from using a former night club in the commercial zone as a place of worship.

The municipality has refuted statements made by a Pastor attached to the New Amsterdam arm of the Universal Church of God after they were forced to worship outside of their locked church building on Wednesday. The statements made by the Brazilian Pastor, according to the council were misleading and incorrect.

The Pastor was at the time expressing his frustrations after church members turned up at their place of worship but to his astonishment was met a heavily secured door stemming from an ongoing issue between the owner of the building and the council.

Pastor Lucian King told Demerara Waves Online News that on Monday, members of the council came and attempted to close the church without legal documents to do such.

“They came on Monday when we were conducting our usual church service and wanted to close the church so I ask them if they have papers and they said no and they left. When we came back on Wednesday, we saw big padlock and chains on the door with a handcuff and no reason as to why the church was closed”. 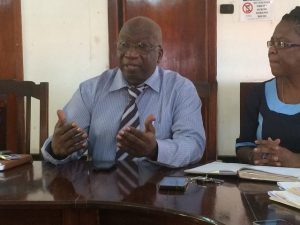 Pastor King lamented that the embarrassing situation was not called for and stated that they would continue to conduct regular church services outside of the locked building until the council reverts its decision.

Deputy Mayor of  New Amsterdam, George Tucker said that about three months ago they were approached by the owner of the building, which previously housed a night club located at Pitt Street in the heart of New Amsterdam. He stated that they requested to convert the club into a church but was told it was not possible.

“They came to us and we told them that they could not put a church there because the area is used strictly for commercial businesses. Nevertheless, the club was soon converted into a place of worship and a month after, we called a meeting with them asking them to cease using the building as a church but they never did”.

According to the Deputy Mayor, the Pitt street area is governed by its own Bylaws and clearly states that the area is strictly for commercial business. He highlighted that on October 26th, a letter was sent to the members of the church requesting them to cease worship there but nothing changed.

“We sent them a letter asking them to stop using the building as a church but they still did not stop so we had no choice but to close the building. He went on TV and said they had no information why the church was closed but we sent them letters and notices saying they need to move. The owner is fully aware that the building is not to be used as a place of worship and he went against strict orders”.

Deputy Mayor Tucker stated that they are hoping to hold another meeting to discuss other building options for the relocation of the church. The Pastor, however is  holding steadfast to his decision to continue worshiping at the building.

2017-11-02
Writer
Previous: Opposition chants down, wave placards in Parliament during President’s address
Next: PPP engaged in “hooliganism” during Granger’s address to Parliament- Nagamoooto