Opposition chants down, wave placards in Parliament during President’s address 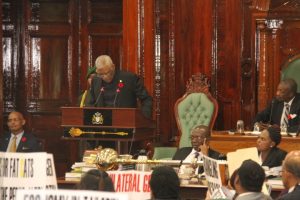 President David Granger addressing the Parliament on its resumption from the two-month annual recess.

Opposition People’s Progressive Party members of parliament did not walk out of the House as President David Granger was addressing the Parliament at the end its two month recess, but instead held up placards and shouted slogans at times drowning out the voice of the Guyanese leader.

They chanted slogans such as “free and fair elections”, “no more rigging” and “not fit and proper” in clear reference to the recent controversial appointment of Retired Justice James Patterson as Chairman of the Guyana Elections Commission.

Except for tapping the gavel about four times, House Speaker Dr. Barton Scotland, who appeared to have been caught by surprise, did not seek the intervention of the Sergeant-at-Arms to restore order in the House.

For his part, President Granger defiantly continued his address as if he was not bothered despite his voice was drowned out at times. On a couple of occasions, he remarked and glanced at the opposition parliamentarians that “they got tired”.

In touching on law enforcement and the violent period stretching from the February 2002 jail break to about 2009 when hundreds of law enforcement agents, gunmen and politicians lost their lives, the Guyanese leader remarked “see where it came from” as he looked at the PPP lawmakers.

When the President concluded his address, the opposition parliamentarians refused to stand as a mark of respect and instead remained seated holding placards and chanting slogans. As the House Speaker was thanking the President, he watched over at the PPP MPs and told them to finish now.

Among those witnessing the protest were several top Western and Caribbean diplomats, senior members of the judiciary and heads of the law enforcement agencies.