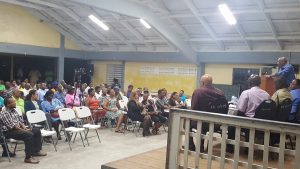 Government has embarked on a countrywide fan-out exercise in response to a barrage of criticisms about President David Granger’s unilateral appointment of a Chairman of the Guyana Elections Commission (GECOM), and dismissed suggestions that the move was aimed at rigging the next general elections.

Harmon said since the People’s Progressive Party Civic (PPPC) lost power at the May 2015 general elections, that party constant “tune” has been one of rigged elections by then GECOM Chairman, Dr. Steve Surujbally through to the absence of a Chairman and the eventual appointment of his successor. “Note the continuation of this theme: from Surujbally ‘e elections- gun rig, to no Surujbally, no Chairman of GECOM- elections gun rig, to now you have a new Chairman of GECOM- elections gun rig. You understand the tune. That is their tune but it has no basis in fact,” he said.

Harmon added that when President Granger appointed Justice Patterson, he did not want someone who would act in his favour because he picked him. “He said ‘I want a man who would be balanced, who would be fair, who would be neutral’ so that what the opposition is asking for , for somebody who they want; it means that you are not satisfied with a neutral person. You want somebody who is going to make it 4-3 and that is not going to work so that is what we are talking about- that fairness, that balance,” the minister said. GECOM is made up of three commissioners from the PPP, three from the government and the Chairman.

The PNCR has had a history of rigged elections from 1964 to 1985 until that party lost the 1992 elections that were internationally certified as free and fair.  The PPP has since questioned Patterson’s integrity, saying he had been part of a group of PNCR executives who had been pallbearers and the funeral of late party leader, Desmond Hoyte and that he is a member of a pro-PNCR Facebook group.

Harmon said Opposition Leader, Bharrat Jagdeo’s nominees were aimed at restricting the President to pick someone who might favour him, but on the other hand electoral rigging was not  the motive for Granger picking Patterson.

With the Private Sector Commission, Georgetown Chamber of Commerce and Industry, Guyana Manufacturing and Services Association, Guyana Human Rights Association, Upper Corentyne Chamber of Commerce and Industry and  the non-governmental organisation, and RISE- Guyana, all condemning Granger’s unilateral appointment of the GECOM Chairman, Harmon said he had not seen so many organisations surfacing in a long time.

The State Minister recalled that Granger had set out the provisions of the constitution that a GECOM Chairman should be a High Court Judge, eligible to be appointed a High Court Judge or fit and proper based on six qualities that essentially means that the person must be impartial, perceived as fair and honest. He said Chief Justice, Roxane George-Wiltshire said in her recent ruling that the President was not legally required to state reasons for rejecting a list of nominees by the Opposition Leader although she believed that in the furtherance of democracy and governance he should do so based on the fact that the Constitution spoke to the need for dialogue as a means of achieving democracy and good governance.

“The judge is saying that there is no legal requirement but that it is her belief… so the law says one thing, but the law says something else…so it is not just a matter of belief, is a matter of law. The President acted lawfully. She said that!,” said Harmon, an Attorney-at-Law. He further noted that the Chief Justice ruled that the President had “sole discretion on what is fit and proper so even though it was his discretion, he went beyond that and he put it down in writing as to what constitutes fit and proper.”

Adams stressed that Granger did not violate the Constitution because Opposition Leader, Bharrat Jagdeo did not present him with a list of nominees that were all acceptable from which he could have picked one. Instead, Adams said the President was given a list that had attempted to “squeeze” him in a box to pick one or two persons.

The lawmaker vowed that no effort would be spared to ensure that Jagdeo and the PPP are not re-elected President of Guyana again. “Don’t worry with Jagdeo. Jagdeo’s problem is the oil. The oil has started to flow in his brain but we have to ensure- the people- that Bharrat Jagdeo and the PPP never return to office,” he said.

Guyana is expected to begin commercial oil production in 2020.