PPP engaged in “hooliganism” during Granger’s address to Parliament- Nagamoooto 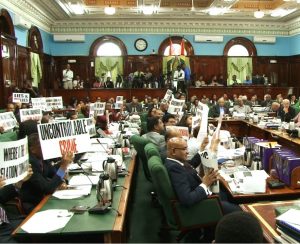 Prime Minister Moses Nagamootoo has labelled heckling of President David Granger by placard-bearing parliamentarians of the opposition People’s Progressive Party a brand of terrorism and hooliganism, but Opposition Leader, Bharrat Jagdeo has justified the protest action.

“I think he [President David Granger] battled on today as a real soldier inspite of an unusual and unprecedented outburst of political hooliganism in the House, I think Mr. Jagdeo has attempted to turn the National Assembly into an arena of domestic terrorism thinking he could intimidate the President of the Republic of Guyana from delivering his charge to the National Assembly”, Nagamoooto was quoted by government’s Department of Information as saying.

The People’s Progressive Party’s (PPP) lawmakers did not boycott the sitting as had been expected, but instead opted to remain in their seats and about one minute into the President’s speech, they whipped out placards and loudly chanted slogans while the Guyanese leader was addressing the House at the end of its two-month recess.

At the centre of the PPP’s protest was President David Granger’s unilateral appointment of Retired Justice James Patterson as Chairman of the Guyana Elections Commission. Jagdeo said the protest in the Parliament Chamber was aimed at highlighting to the international community the constitutional violation by the appointment of the GECOM Chairman. “This breach (the unilateral appointment of a GECOM Chairman in violation of Constitutional provisions) was so egregious that just staying away was not adequate. We had to be here actively protesting the breach of the Constitution and the (undermining of) the rule of law. Therefore, that is why we took this action – to highlight, not only to Guyana, but to the international community that was here, about how seriously we, and the country, view this matter.”

The President, despite the uproar delivered his speech, where he highlighted measures implemented by the Government over the years and outlined plans or further advancement of the economy, as the Administration work towards ensuring the “good life” for all Guyanese.

Prime Minister Moses Nagamootoo, in a special interview following the President’s address expressed dissatisfaction with the Opposition’s behaviour in the National Assembly, noting that the Opposition Leader, Bharrat Jagdeo has brought himself down to a lower level.

The Prime Minister further expressed that, “To hide behind a slogan of rigged elections was infantile, but of course… personally, I didn’t expect any different from Bharrat Jagdeo and his political hordes in the National Assembly.”

The Opposition, according to several ministers of Government, not only displayed a high level of disrespect for the Head of State but also a negative image as representatives of the people and further did so in the presence of the diplomatic community.

Minister of Public Telecommunications, Catherine Hughes described their behaviour as unproductive, “Because the Parliament is supposed to be one place where we could have informed intelligent discussions and therefore to see it denigrated in such a manner…my distress is that the People of Guyana did not get to hear the content [President’s address]as clearly as they should have.”

Her sentiments were supported by Minister of Indigenous Peoples’ Affairs, Sydney Allicock, who noted that, “If we are truly interested in the development of Guyana and the unification of this nation, then we need to put all of our efforts in building that confidence of our People. I think the Opposition had the opportunity to do that over the 23 years and at least they should have listened to the President instead of behaving in the gutter politics, we should now become more matured and realise we have a beautiful country to manage.”

Minister within the Ministry of Natural Resources, Simona Broomes also shared her views on the Opposition’s display, noting that, “to demonstrate that kind of disrespect is an insult to themselves. I feel embarrassed for them, I know that the PPP are a wild bunch of people…but to come and demonstrate the level of wildness here…it’s horrible. It is the President we are talking about. The diplomatic corps know about Bharrat Jagdeo and his behaviour, but where’s the pride for us Guyanese?”

As the President addressed the House. Speaker of the National Assembly, Dr. Barton Scotland tapped his gavel several times to restore order, but the Opposition refused to heed his appeal.

The next sitting of the House is scheduled for November 17, 2017, when Minister of Finance, Winston Jordan is expected to present the 2018 National Budget.