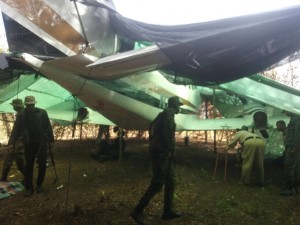 Police and soldiers inspecting the illegal Cessna plane that was found at Yupukari, Rupununi.

Several village ouncillors in Region Nine and residents of a number of scattered Rupununi villages allegedly know and support illegal activities related to the construction and maintenance illegal airstrips as well as the illegal landing of planes, according to a number of police intelligence reports dispatched to the Police Commissioner.

The reports are part of supporting documents in a report of a Commission of Inquiry into the discovery of twin-engine Cessna 441 Conquest II plane on September 14, 2016 covered by a tarpaulin and dried vegetation at Yupukari, Rupununi.

In a report filed on September 13, 2016, the Intelligence Chief told the acting Police Commissioner that illegal aircraft landing continues between Katoka and Fly Hill villages, central Rupununi where there is said to be an illegal airstrip. The report names councillors as having knowledge of those illegal activities.

A named resident of Tabatinga Housing Scheme, who is a vehicle driver and owner “could be seen with his vehicle on a regular basis at this particular place before and after the aircraft touches down” and that he was “also involved in the illegal aircraft landing at Parabara, Manwar, Mountain Point and Mandakara Airstrip”. That report further states that the Tabatinga-based man supplies farmers in that area with foodstuff and other necessities and “he also told them to keep the information to themselves because the persons who are involved were well armed and dangerous.” Farmers, according to the intelligence chief, describe the area as a “gas station” where aircraft without registration markers could be seen refueling between 2:30 and 4:30 PM. “It was also learnt that there were a number of fifteen gallon containers with aviation fuel and that several aircraft are suspected to be refueling at this airstrip,” states that report.

The Beechcraft Kingair aircraft that was found on an illegal airstrip in August, 2017.

According to a similar report dispatched to the acting Police Commissioner on February 12, 2016, that an illegal airstrip is in operation at Munwar Savannahs and a former employee of the Region Nine Council and a tour guide has been shuttling to the airstrip. Two named villagers from Katoonarib and others unnamed from Lethem are said to be involved in maintaining that airstrip, the report states.

A man and his sons as well at Parabara Village were also named in a report dated 12th February, 2016 as being involved in maintaining and monitoring the airstrip. A councillor is also  said to be aware of their involvement, the report states.

A Regional Intelligence Report also states that an Illegal airstrip had been also found at Good Hope in December 2105 and a contractor in Lethem had been contracted by a man to “grade the runway using his excavator but it was not ascertained where he resides.”

An intelligence report dated December 15, 2015 and sent to then Police Commissioner Seelall Persaud states that a female of a local airline conducts daily visits to the Pirara and Montezero ranches which are nearby the Mandakara Airstrip that had been built in the 1970s to shuttle beef from the Pirara Ranch to the Coast. That airline employee’s two brothers who at that time had been employed by the same local airline and a GRA officer “would go fishing and hunting at Pirara, Markanata and Montezero ranches everyday. “It was said that the (names omitted) brothers have knowledge of the illegal activities that are taking place at the Mandakara Airstrip

Meanwhile, a senior police officer has been accused of compromising a probe into the discovery of an illegal plane and airstrip in southern Guyana, a Commission of Inquiry found.

Conducted  by former Chief-of-Staff of the Guyana Defence Force, Retired Brigadier, Edward Collins, the probe found that Police sub-divisional Commander, Banwarie failed to take charge of the crime scene, this creating an environment for abuse of evidence,  mainly fingerprints that all turned out to be smudged.

“The Commission heard that he failed to take charge of the aircraft upon discovery and to deem it a crime scene, the preservation of which would have been in accordance with established procedures. The Commission concluded that this lapse caused the inquiry or any other investigations to be denied valuable information in tracing the activities of the foreign aircraft,” Collins told President David Granger in the Commission of Inquiry report dated November 25, 2016.

Collins also said the security forces could have done more after the aircraft was found and evidence had emerged pointing to the alleged involvement of person or persons. “The Commission concluded that there was enough evidence to launch a series of more active and robust joint operations than were being conducted. The least the Commission expected was a search of the Melville’s Ranch,” he stated.

The probe also found that a Guyana Revenue Authority (GRA) officer and a prominent businessman in Lethem were among several persons who had knowledge of that Cessna 441 Conquest II plane and the construction of an illegal airstrip where it landed.

The plane, which was found in a canopy of thick vegetation on September 14, 2016, bore fake registration marking “N767M” instead of its authentic marking of “N533M” and serial number 441-0222. Investigators believed that the plane began its journey from near Medellin, Colombia and was likely piloted by a tall white Brazilian man and accompanied by a short mixed Colombian woman.

The Commission of Inquiry concluded that the plane, whose journey originated in Colombia with unspecified “high-value cargo believed to be cocaine”, might have encountered engine problems and was forced to land in Guyana.

In addition to several residents nearby the plane and the illegal airstrip who would have provided support to persons associated with the illegal activities, the Commission of Inquiry was told by the Head of the Guyana Police Force’s Special Branch, Senior Superintendent Lindon Denny that a then serving member of the Guyana Revenue Authority was “linked to the activities of the aircraft that was discovered and was also allegedly involved in human smuggling particularly Cuban nationals across the border from Guyana to Brazil.”

The top police intelligence officer recommended to the Commission of Inquiry that the GRA officer be “immediately transferred from his current location pending the outcome of the investigations.”

A friend of the GRA officer has told the Commission of Inquiry that several Colombians who had been near the plane had eventually fled to neighbouring Brazil by a named female resident.

The Commission of Inquiry was told that the once posh plane that would have been usually used by wealthy persons. However, only the co-pilot and pilot seats were found aboard.

While the twin-engine plane was found in September, 2016 covered by a tarpaulin and dried leaves, the inquiry found that intelligence files had recorded that the same plane could have been in that location in late May, 2016 but was definitely there on August 18, 2016, some 27 days before the security forces discovered it. “The Commission found that information of the aircraft’s activities in southern Guyana was circulating among regional and central government officials since May, 2016 and would have been in the national intelligence files around the same time,” states the report.

Earlier this year, a Brazilian-registered illegal plane was found at another airstrip in the Rupununi.