Heavily armed bandits escape with over $1M in cash, valuables from Corentyne bar 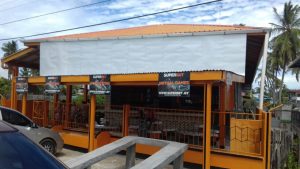 The business that was robbed is located behind this Superbet outlet at Number 65 Village, Corentyne.

Police in Berbice have been questioning everyone, including a suspicious customer, after 25 persons were relieved of their valuables when five heavily armed gunmen stormed a Corentyne bar on Sunday at about 7:30 pm.

Divisional Commander, Assistant Commissioner Lyndon Alves said no one had not been arrested up to Monday afternoon.

Businessman and owner of the bar located at No. 65 village, Corentyne; 60-year-old Krishendatt Hemnauth stated that the traumatic ordeal lasted about seven minutes.

The businessman, who was injured during the incident told Demerara Waves Online that around 7:00 pm, the superbet outlet at the front of the business was cleared and about 25 persons were imbibing at the bar located at the back.

According to Hemnauth, immediately after closing the gate, he was confronted by a masked man holding an AK-47 assault rifle and was told to ‘not scream’. 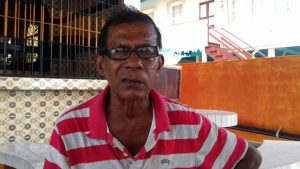 At that time, three other men brandishing guns rushed in and fired a warning shot and ordered the customers to lay on the floor.

One of the bandits stood guard outside while the others conducted the robbery.
“The man come in with the gun and lash me in my head and say don’t mek noise. And the other guys rush in and tell them man stay on the floor and they searched everybody”.

The businessman said that he suspected the men knew him and his 21-year-old son as they were the only two persons who were assaulted by the suspected head of the team.  “I think they know me cause I don’t behave nice and they only beat me and kick my son so they mussie know me”.

Hemnauth stated that the men carted off six high-end cellphones, a total of GYD$1 million in cash from the customers, GYD$35,000 from the sales and GYD$100,000 from his son. 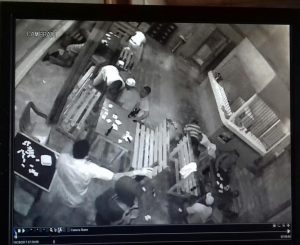 Further on, the man disclosed that the men appeared to have been extra careful with one of the customers. He stated that the man only visited the bar three weeks prior to the incident and was there for two hours before the bandits struck.

However, he stated that they noticed no suspicious behavior from the man prior to the incident.

From the CCTV surveillance video footage captured, it was seen that as the men came in, the suspicious man held on to one of the guns before being told to stand in a corner.

Hemnauth,who has been operating the business for over three years, stated that Sunday was the first time he was robbed and now feared for his safety. When asked if he is a licensed firearm holder, the man replied negatively stated that he was denied his license the first time he applied and has not made another attempt.

2017-10-31
Writer
Previous: Male sex workers, Cox and Forrester, charged with robbery
Next: AFC-Canada pulls out of party over GECOM Chairman’s appointment; Ramjattan vows not to back down