AFC-Canada pulls out of party over GECOM Chairman’s appointment; Ramjattan vows not to back down

The headquarters of the Alliance For Change (AFC), Railway Road, Kitty.

Chairman of the Alliance For Change (AFC), Khemraj Ramjattan- one of the parties in the governing coalition- on Tuesday rubbished a decision by his party’s Canada Chapter to pull out until the AFC denounces President David Granger’s recent unilateral appointment of Retired Justice James Patterson as Chairman of the Guyana Elections Commission (GECOM).

“Unless and until all these resolutions are complied with in full, AFC-Canada hereby gives notice that it has withdrawn its membership from, association with and support of the Alliance For Change Party,” Secretary of AFC-Canada, Laurence Williams said in a letter to Ramjattan, AFC Leader, Raphael Trotman and the party’s National Executive Committee (NEC) after a meeting held last Friday.

While AFC-Canada said it is no longer associated with The Alliance For Change Party or any other political party, for the time being, it said it would “continue to support the Guyanese people’s quest and struggle for national unity, democracy, transparency, accountability and peace and progress”.

Ramjattan, however, laid bare his party’s position on calls for the AFC to call for the the GECOM Chairman’s appointment to be quashed. “We are not going to retract on that decision at all,” he said, adding that the AFC is a liberal democratic party and members could do as they are best advised. 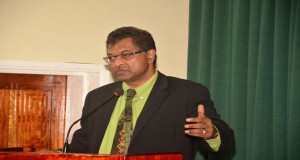 Chairman of the Alliance For Change (AFC) and Minister of Public Security, Khemraj Ramjattan

“I am in the process of  indicating to them our very substantial, cogent reasons. That is as much as I can do at this time time because I think that they did not get that clearly and they are now getting our TV programmes, our articles and the whole set of circumstances that led up to it and I am hopeful they would appreciate those sound reasons. If not, well it will be unfortunate,” Ramjattan told Demerara Waves Online News.

Williams said in a letter to Ramjattan, AFC Leader, Raphael Trotman and the party’s National Executive Committee (NEC) that the Canadian chapter recently met and expressed grave concerns about James’ appointment. Williams said his party’s group in Canada agreed that if the party does not publicly call for the GECOM Chairman’s appointment to be rescinded and for one of the 18 persons nominated by Opposition Leader Bharrat Jagdeo to be appointed,.

However, Ramjattan vowed that the AFC’s leadership would not give into the Canadian chapter’s demand for the AFC to publicly denounce the GECOM Chairman’s appointment. “Absolutely not. We aren’t going to do that because we have made our decision and our decision is grounded on a whole lot of political history and  facts in relationship to why we did what we did and you would appreciate that Jagdeo is not an easy political animal and we appreciate that it is a presidential choice,” he said.

Other resolutions, Williams referred to, are the need to rewrite the political agreement between the AFC and A Partnership for National Unity (APNU) to ensure legal enforceability with specific time limits for its implementation and the immediate commencement of constitutional reform and the enactment of a reformed constitution before the next general election. A Constitutional Reform  Bill has been tabled in the House to pave the way for countrywide consultations.

The AFC Chairman, however, cast some doubt over who attended the AFC-Canada meeting and  said recently he learnt that former members of the opposition People’s Progressive Party’s (PPP) North American front-group, Association of Concerned Guyanese (ACG), had expressed an interest in joining AFC- Canada. Williams told Demerara Waves Online News that the meeting was held in North York, Toronto where the venue was filled to capacity.

“If that is their position, well then we’ll just do have our work again. Fall-outs like this is always part of the political landscape because these are fellows who had really worked hard for the party,” Ramjattan added. He said he was not worried that the AFC would now lose significant financial resources with the withdrawal of AFC-Canada because he was “absolutely certain” that major financiers would remain with the party.

Referring the AFC-Canada Secretary’s letter in which concerns were raised about the functioning of the Valentine’s Day 2015 Herdmanston Accord and that AFC members appeared more preoccupied by political aggrandizement and benefits of power. “That is a lot of thrash and a lot of crap and they could say what they want in relation to a number of these issues. We are working our backsides very, very hard here in Guyana to move this country forward and if some of them are going to fall prey to the predator, well fine and that is their opinion,” he said.

AFC-Canada recommended that the party assess its very survival and purpose of existence because it has no independent collective representation in Government and its support base is decimated.

“Continued association with the PNC will result in complete annihilation. The AFC members of Parliament must consider whether their personal aggrandizement is more important than the survival of the Party. Is it time to withdraw from the Coalition?,” the AFC-Canada Secretary said.

That North American arm of the AFC called on all party members members and supporters in Guyana and the diaspora to hold the leaders of the party accountable to the high ideals, morals and aspirations that the Party was founded upon.

2017-10-31
Denis Chabrol
Previous: Heavily armed bandits escape with over $1M in cash, valuables from Corentyne bar
Next: Trinidadian, who faked kidnapping for ransom, remanded to jail