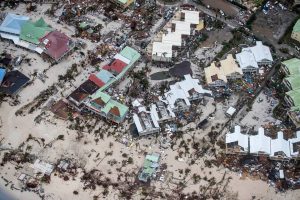 “We are willing to do whatever we can even for those wanting to come back,” he told Demerara Waves Online News.

With the United States, The Netherlands and Canada having already landed military aircraft to evacuate their citizens who have been stranded on the Franco-Dutch island, Greenidge was asked whether it was possible for Caricom and those Developed Nations to coordinate and facilitate the airlift of Caribbean nationals to their homelands.

“Caricom is looking at such coordination. This is one of the things discussed yesterday (Saturday) but what I am saying is that whilst in principle the need was recognised the specifics by way of needs could not be determined yesterday and as soon as we have those details we will ask whoever can help or if we can help,” said Greenidge. He remarked that the Caribbean’s aviation and maritime capacity “is very narrow; we are not the place where we might have been twenty or thirty years ago.”

Most of the houses on the island have been either badly damaged or destroyed, and looting of water, food and other items have worsened an already severe shortage of basic necessities. Additional security personnel from The Netherlands and France been deployed to the island to enforce a strict curfew and curb looting.

Ahead of government possibly making known its position on Monday, he noted that the Ministry of Foreign Affairs has been unable to contact Guyana’s Honorary Consul to St. Maarten, Cleavland Beresford. Greenidge said nothing has been formulated because government needs to make contact to provide the number of persons and their names.

Except for military aircraft and ships with emergency supplies, the island has been virtually isolated from the rest of the world. Only one radio station is on air and telephone and Internet contact are extremely limited.

The Guyanese Foreign Minister said Caricom leaders, including those from observer territories, attempted to assess the needs of the countries and territories that have been battered by Hurricane Irma. Those needs, he said, that were examined by regional leaders included “a recognition that some countries had citizens who wanted to return.”

Meanwhile, Guyana’s Honorary Consul to Antigua and Barbuda, Bobby Reis said most of the residents of Barbuda have been evacuated to Barbuda where refuge has been provided by relatives, friends and even strangers. He said that twin-island nation’s authorities did not seek to ascertain the nationality of the evacuees.

Across in the British Virgin Islands, one Guyanese is among five persons who were killed by Hurricane Irma.

2017-09-10
Denis Chabrol
Previous: Listen to the latest on the situation in St. Maarten
Next: Bulk marijuana seized; several arrested