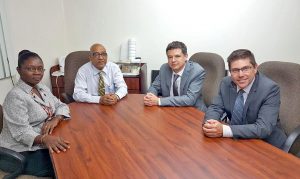 A Canadian company that refines Guyana’s gold wants local authorities to tighten several areas to ensure the precious yellow metal is not used to wash dirty money, the Ministry of Natural Resources said in a statement.

Royal Canadian Mint’s Director of Storage and Refining Solutions, Steve Higgins has since told Minister of Natural Resources, Raphael Trotman that he is pleased “with some of the due diligence efforts implemented” at the Guyana Gold Board and efforts being made by that entity to tighten and stick to existing Anti-Money Laundering/ Countering of Financing Terrorism policies, but a number of improvements is needed.

“Both parties agreed that there is work that remains to be done in several areas, and which must be pursued diligently,” the Ministry of Natural Resources said in a statement following a visit by top representatives of Royal Canadian Mint (RCM).

GGB’s Chairman, Gabriel Lall was quoted as saying that “there is room for improvement through increased monitoring and greater reconciliation with sister organization the Guyana Geology and Mines Commission (GGMC), where RCM also held discussions.”

The RCM team, which included Manager of Compliance, Derek Hall, examined several files and spoke with a wide range of personnel at the Gold Board, a private gold dealer and the Guyana Gold and Diamond Miners Association to ascertain how well Guyana is supervising its anti-money laundering system and determining the source of gold purchased. “RCM’s team reviewed GGB’s files, interviewed employees, visited a gold dealer, and met with members of the agency’s board of directors,” the ministry said.

“The scope and focus weighed heavily on GGB’s policies and procedures relative to anti-money laundering supervision and the source of gold purchased,” the Ministry of Natural Resources said in a statement. “The principal objective was to foster a level of assurance on the robustness of oversight processes of all gold declared from mine to market.”

Acting GGB General Manager, Eondrene Thompson pledged to take steps to “remedy existing shortfalls”. Authorities said they are looking forward to RCM’s preliminary report which could go a far way in strengthening public confidence and trust in the GGB’s work.

Canada’s High Commissioner to Guyana Pierre Giroux attended the meeting between the RCM official and the Minister of Natural Resources and the GGB Board Chairman.

RCM has been refining Guyana’s gold for more than 30 years.