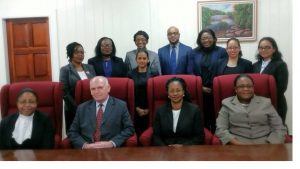 Consultant Peter Pursglove and Members of the Judiciary and the Magistracy

Guyana is examining ways of reducing the prison population and creating opportunities for accused while they await trial, the Ministry of Public Security said  Wednesday.

Consultant, Senior Counsel Peter Pursglove, who has been hired by government and the Inter-American Development Bank’s (IDB) Citizen Security Strengthening Programme, is currently holding a series of consultations from July 24- 28 to gather data for a study on alternatives to pre-trial detention.

“The study is expected to contribute to a reduction in prison overcrowding and prevent further criminalisation of youths since it will contribute to the design of a structured pre-trial opportunity programme,” the ministry said.

The issue of prison overcrowding again came to the fore earlier this month when more than 1,000 prisoners were initially transferred to a swampy area near the Lusignan Prison after fire destroyed the Georgetown Prison because there is no space at the other prisons. In order to create some space, authorities decided to release inmates whose sentences were nearing completion and reduce bail for those who could not have afforded more.

Pursglove, on his second visit to Guyana, is meeting with several senior government officials, members of the Judiciary and Magistracy, technical officers from relevant government departments and ministries along with stakeholders from civil society and non-governmental organisations.

The consultant has already found out during preliminary consultations with stakeholders that there is no structured diversion programme in Guyana and that resources will have to be allocated by government if such programmes are to be established.

“However, before proceeding to design and implement such programme it is necessary to gather and analyse the relevant statistical and other types of information available relating to the various offender groups that may be targeted by any diversion programmes,” the Public Security Ministry added in a statement.

Pursglove’s tasks include reviewing criminal laws to determine which offences should no longer be classified as criminal acts or which may now be decriminalized; collecting and analysing the relevant statistical information relating to the various offender groups that may be targeted by any diversion programmes, and consulting on the possibility of developing a diversion strategy aimed at diverting certain types of offenders out of the criminal justice system.

That component of the Citizen Security Strengthening Programme will also see e consultant investigating the possibility of establishing a pilot diversion programme for the mentally ill to ensure that mentally ill offenders, who enter the criminal justice system, are sent for care.

Attention, government says, is also being paid to examining the prospects of establishing a diversion strategy for alcohol and substance abusers aimed at curbing alcohol and drug related crime; and exploring possibilities for the use of restorative justice as a diversion mechanism and alternative to imprisonment for matters that would otherwise be subject to criminal sanctions.

The Citizen Security Strengthening Programme focuses on the prevention and reduction of crime and violence, and public sector and civil society capacity building.