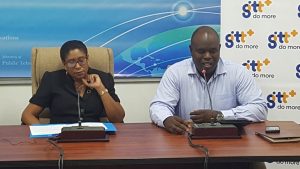 Government and the Guyana Telephone and Telegraph Company (GTT) on Tuesday said rogue elements have been sabotaging that telecoms provider’s fibre optic cable , resulting in at least 200,000 subscribers having to go without cell, land and internet services.

“It’s somebody that definitely has a strong motive to attempt to degrade our service,” Chief Executive Officer of GTT, Justin Nedd told a news briefing he shared with the Minister of Public Telecommunications, Cathy Hughes.

Hughes warned that the National Telecommunications Agency (NTA) would not be issuing licences to any entity with a “warped sense of competition” that is violating the law by destroying telecommunications infrastructure in the hope that it would gain advantage. “It would be rather foolish should we get any kind of information that might be able to prove who the perpetrators are, that they would think that they could then come to the Telecommunications  Agency and be issued a license. I would say that there is absolutely no way that I could imagine that happening,” she said.

The GTT boss refused to say whether any organisation or person is suspected to be engaged in “four separate and significant cuts” during the past 10 days to the well-armoured fibre optic cables mainly in the Soesdyke-Linden area, but said reports have been made to the police with little success. “We always file reports with the police and I must say that the Guyana Police Force has been very helpful in the past in investigating. Unfortunately, the rate of success is highly dependent on our citizens, our people, our Guyanese to really bring forward information and that has not been forthcoming as we would like,” he said.

At least 200,000 persons and businesses are affected in Linden, Kwakwani, Bartica, Mabura and Ituni and a gold mining area

Throughout the news briefing that was held at the Ministry of Public Telecommunications, suggestions were made that the cable cuts had more to do with competition in a planned liberalised environment.

The company estimates that the cut fibre cables have cost at least GYD$50 million in lost business and repairs to fibre-optic cables over the last 12 months.