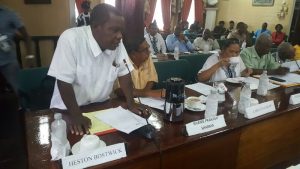 APNU-aligned Councillor, Heston Bostwick moving the motion seeking time for Council to consider a legal opinion against the suspension of the Georgetown Parking Meter bylaw.

Most A Partnership for National Unity (APNU)-aligned Georgetown City Councillors Monday afternoon voted to  delay whether City Hall should approve an order by Communities Minister, Ronald Bulkan to suspend the parking meter bylaws.

APNU Councillor, Heston Bostwick moved a motion that legal advice received by the Council concerning Bulkan’s order be studied and then advise the minister of its decision. “Thereafter, we would be in a better legal frame of mind to determine the way forward,” Bostwick said.
When that and two other motions were put on the floor, the majority of councillors- those from APNU- supported the Bostwick-sponsored motion.
Attorney-at-Law, Roger Yearwood said in three and a half page legal opinion to the Town Clerk warned that the Minister of Communities erred in interpreting the law he used to suspend the bylaw. Further, the lawyer stated that Bulkan failed to hold an inquiry before issuing the order on March 17, 2017 to allow for a renegotiation of the agreement. “Moreover, the Act contemplates that an inquiry must be held by the Minister in order to establish that the Council is in default in the performance of any duty imposed on it. This inquiry, naturally,  necessitates a hearing at which the Council must be afforded an opportunity to be heard, in accordance with the rules of natural justice, which militates against a person being condemned without being afforded an opportunity to be heard in his own defence,” said Yearwood. He added that no such inquiry was held and nei tg her does the Council know in what way it is being alleged that the Council is in default whether of “their functions” as stated by the Minister or “in the performance of any duty imposed upon it. He said on that basis the Minister of Communities is ultra vires his powers he enjoys in the Municipal and District Councils Act.
Yearwood said the minister used Section 306 (1) of the Municipal and District Councils Act “direct the Council” to suspend the Georgetown Metered Parking By-Laws but does not suspend or purports to do so.
He said if the Council accedes to to that mandate, it would open up City Hall to a costly breach of contract in a Guyana court or also costly arbitration proceedings in the United States.
But a second round of voting was held after PPP Councillor, Kuppen said he had counted seven instead of five disapprovals for the Bostwick motion.
The final count for that motion was 17 for, seven against and two abstained. Among those voting in favour was Councillor Oscar Clarke who is also General Secretary of the People’s National Congress Reform, the largest partner in the governing APNU+Alliance For Change, voted in favour of considering the legal opinion. “When we got the minister’s order, we sent it to lawyer because we said we not too sure about this thing. The lawyers advise us and on the basis of the lawyer’s advice, we are saying let us put this thing down until Council can study the legal advice,” he said. “Clearly, the minister would want to know what the Council’s lawyers have advised them,” he said. Councillor Akeem Peter’s motion was for a one-hour suspension to consider the legal advice, while People’s Progressive Party Councillor, Kane Sharma was for the motions to be discarded because the Minister of Communities’ order was specific. His motion attracted support from six councillors, 14 opposed and seven abstentions.
Debate was then allowed on Bostwick’s motion.
Questioned by acting Mayor, Sherod Duncan whether the motion requires a two-thirds majority, Town Clerk Royston King said it is a simple majority and he would have to respond to the acting Mayor in writing. Duncan reiterated that King should guide him in law.
Duncan and Lionel Jaikarran who are from the the Alliance For Change (AFC), and APNU Councillors Albert Mentore and Ron Persaud voted against the consideration of the legal opinion, saying that Cabinet’s decision was superior and should not have been ignored.
“Why are we going against Cabinet? President Granger, I would like to think, is also part of this decision to suspend this programme. Why are we going against this Cabinet decision? Are we being contemptuous of the Cabinet? I would not like to think so. I cannot support this motion for more time,” said Jaikarran whose position was echoed by PPP Councillor, Bisram Kuppen.
Persaud also raised serious concerns about the legal opinion coming from the Law Firm of Fraser, Housty and Yearwood because Attorney-at-Law, Stephen Fraser is representing Smart City Solutions in court and “now they are advising us.” “We are now taking advice from the people and the camp and the other side that Cabinet wants for us to vote on and I will always vote with what Cabinet wants. We are part of this government, we are part of Central government and we have to be guided accordingly,” said Persaud, a city businessman.