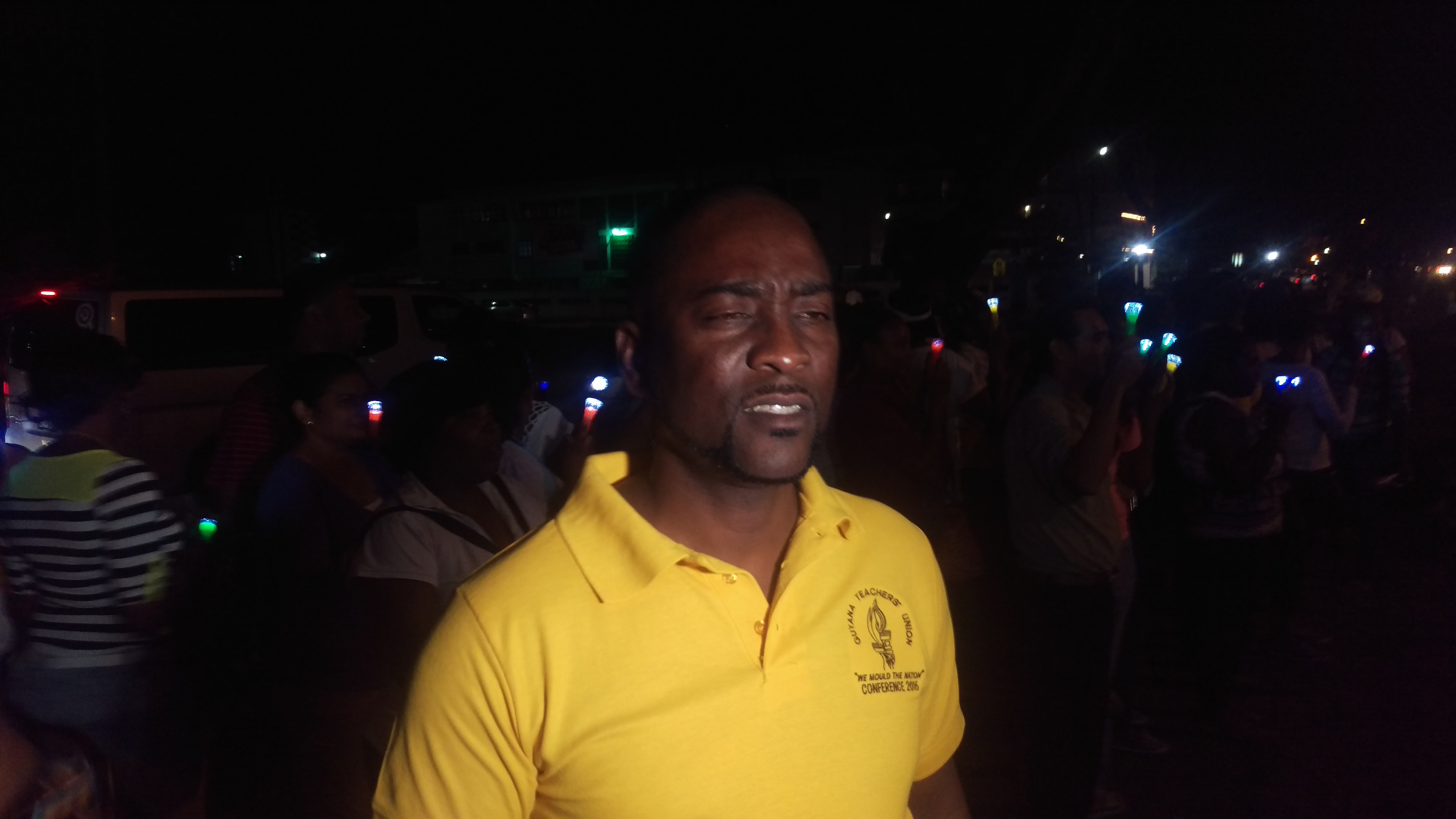 Led by the Guyana Teachers’ Union (GTU), a sizeable number of teachers Tuesday evening marched on the Main Street residences of President David Granger, and Prime Minister Moses Nagamootoo, who now functions as President since Mr Granger is out the country.

Tackling the impact of parking meters which take effect from Tuesday (January 24, 2017), GTU President Mark Lyte called it an insult against teachers who already have small salaries.

“That cannot be so,” he proclaimed, to support from some 60 or so teachers behind him. The teachers union has already condemned the placement of parking meters in front of schools, but Lyte said if teachers must pay then the Education Ministry ought to foot the bill.

The GTU President said government failed to address concerns raised by teachers through the Education Ministry relating to an agreement between the union and the Guyana Government dating back to 2011, which expired 2015 when the David Granger Administration took office.

On salary increases, Lyte said there hasn’t been any increase in salary for teachers aside from 10% and 6% increases imposed on public servants. He said while teachers had accepted the raise, those were not the rates negotiated for.

Duty free concessions, clothing allowances, station allowances, hardline allowances, Whitley Council were some of the measures included in the 2011 agreement, which Lyte said the administration is yet to deliver on. Concerns were also raised about the dismal working conditions which teachers endured.

Station allowances act as a cushion for teachers placed in hinterland regions which have a relatively high cost of living than coastal regions. Whitley Council leave on the other hand is a one-month leave given to teachers every four years.

Lyte said the body hopes for Whitley Council leave to be reduced to every three years, with monies for leave given at a specific time as opposed to “willy nilly” disbursal.

“We made a very strong case with the administration to say to them we would like for our teachers to still enjoy that benefit,” Lyte said, adding the list has moved back and forth between the Education Ministry and GTU, and ought now to be in the care of the Guyana Revenue Authority (GRA).

Turning his attention to the present Teaching Service Commission (TSC), Lyte described constitutional body as “tired.” He believes the body on serves to frustrate teachers and the education system.

The GTU is calling for new commissioners to be sworn in, calling on President David Granger to intervene saying this affects teachers, their offspring, and the nation’s children. The GTU President is calling for teacher promotions to be handled swiftly by the commission.

The GTU said this is the first of their actions, which will continue. The body is not opposed to physically removing themselves from the classrooms as a form of protest to ensure their concerns met.