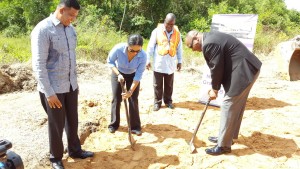 Head of Jag’s Aviation, Alana Tiwari and Minister of State, Joseph Harmon turning the sod for the construction of a hangar at the Eugene F. Correia International Airport. At left is Mr. Brian Tiwari.

BK International on Tuesday turned the sod to build a US$3.5 million dollar hangar at the Eugene F. Correia International Airport at Ogle as part of the company’s plans to bring down the cost of domestic airfares, Chief Executive Officer, Brian Tiwari said.

“It’s to increase our fleet and make our flights cheaper,” he told Demerara Waves Online News., alluding to the fact that his quarry operations has contributed to the reduction of stone from GYD$12,000 to GYD$8,000 per ton.

A company associate said plans are in train to change the name of the company from Jag’s Aviation to BK Air. The hangar would be built south of Wings Aviation/Fly Jamaica’s operations.

Tiwari said his company intends to increase its fleet of five aircraft, including a Polish-made Sky Truck, “as the need arises” to first serve the hinterland and then the Caribbean.

Minister of State, Joseph Harmon welcomed BK International/ Jag’s Aviation’s expansion plans, saying that it is in keeping with the Guyana government’s thrust to improve the quality of service to the hinterland.  “That is the heart and lung of Guyana and the extent to which we can provide a quality service to the hinterland it is to that extent that Guyana will develop and develop rapidly,” he said.

None of the Ministers of Public Infrastructure was present at the event. Participating in the turning of the sod were Brian’s daughter, Alana, and the Minister of State.

Currently, Jag’s Aviation is based at the Guyana Sugar Corporation’s (Guysuco) hangar, and also uses the facilities of smaller operators.  The Tiwari-owned company also intends to reciprocate assistance to small carriers when its hangar is completed.