The plane with the damaged nose wheel at the Eteringbang airstrip. (Roraima Airways photo)

Even as the Guyana Civil Aviation Authority (GCAA) continues to probe an incident at the Eteringbang Airstrip that resulted in damage to a plane, the Chief Executive Officer of the Roraima Group of Companies, Gerry Gouveia on Tuesday denied that that aircraft was overloaded with several drums of fuel.

GCAA Director General, Retired Col. Egbert Field said a probe has been launched into that incident and the pilot has since been grounded pending the outcome of the probe in another by Thursday.

Field said preliminarily he has been advised that there was an overrun that resulted in some damage to the nose wheel and the under-carriage. “The pilot saw a puddle of water, aborted the takeoff and could not stop before the end of the runway and went off the runway about twenty to thirty feet,” he said.

No one was injured. The Pilot,  Chief Engineer , Assistant Engineer and two other passengers were aboard at the time. The engineers were about to return to Ogle after fixing a landing gear problem on that plane, Gouveia said. 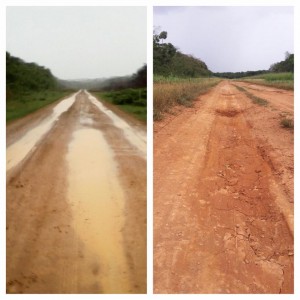 A section of the deplorable runway at Eteringbang (Roraima Airways photo)

Field added that “we are eagerly investigating to ascertain why he could not stop before the end of the runway.” He said the pilot has been grounded for 30 days, in keeping with normal procedure, because the cause of the incident is unknown.

The Roraima Airways boss declined to say how the plane overshot the runway because he would be disrespecting the GCAA while it is conducting the investigation.

The veteran aviator said the “venom and misinformation” was being peddled by a competitor who recently “got away from Guyana” with two Cessna aircraft.