A top official of the American oil giant, ExxonMobil, on Tuesday cautioned Guyanese against expecting a large number of direct jobs when Guyana begins commercial production and instead said it is the government’s responsibility to use oil revenues to help create employment.

Jeff Simons, the Country Manager of ExxonMobil’s local subsidiary- Esso Exploration and Production Guyana Limited- told media representatives  that only two Floating Production Storage and Offloading (FPSO) vessels would be operated by at least 50 persons each. “The greatest benefit is the revenue stream provided to the country. If job creation is critical, then take some of that money and put it into areas where job creation could be exponential relative to what we are talking about here,” he said.

Guyana intends to enact Sovereign Wealth Fund legislation to ensure that oil and other natural resource revenues are properly managed. The country is also advancing plans to join the Norway-headquartered Extractive Industries Transparency Initiative that seeks to guard against corruption and ensure transparency in the natural resources sector. 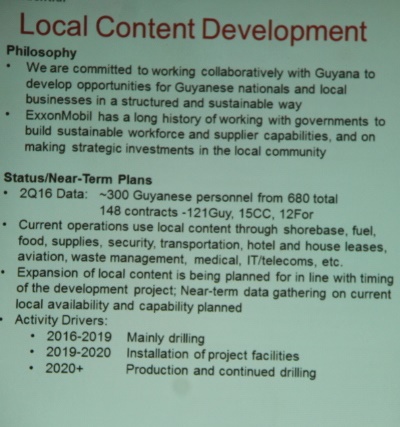 “It’s not a very people-intensive activity,” he told the briefing held at Cara Lodge, New Market Street, Georgetown. “Our footprint is relatively small when it comes to jobs,” company spokeswoman, Kimberly Brasington added. She said in other countries some of the oil earnings are used to improve social and physical infrastructure and so create jobs.  Simons informed that the high-tech oil exploration and production equipment requires highly skilled persons.

Currently, there are 300 Guyanese outsourced contracted service providers working for ExxonMobil locally out of total of 680 persons. A further breakdown shows that between 150 to 180 foreigners are working on the rig located about 200 kilometres offshore.

ExxonMobil officials noted that unlike Guyana, Trinidad has numerous scattered rigs with a larger footprint for jobs being provided by dozen of operators. “Drawing parallels to Trinidad is really, really very difficult. We need a huge amount more luck and finding a lot of fields before we ever get to their magnitude and breadth of the industry,” he said.

Simons made his position known as the Guyana government and other interest groups have been pushing for local content in the oil industry. ExxonMobil suggested that there is scope for job creation in the provision of certain supplies such as cement and mud, and food.

Simmons said the Production Sharing Agreement with the Guyana government provides for the recovery of several billions of United States (US) dollars that the company has already invested in seismic surveys and actual exploration.

From day one of oil production, Guyana would get about half of the revenues from profit oil while a fraction would go to ExxonMobil and other investors to recoup its investment through cost oil.

The EPPGL/ExxonMobil official said the company has begun exploration work at another location named SkipJack which is separate from Liza where the company has already confirmed a deposit of 800,000 to 1.2 million barrels of oil.

Currently, ExxonMobil is preparing to file a request to the Environmental Protection Agency for an Environmental Impact Assessment (EIA). After the EIA  is possibly approved around mid next-year, the company plans to push ahead with getting its development plan approved and then decide to “go for the high dollar construction.”

The company plans to re-deposit associated natural gas until it makes a firm decision on whether it should be extracted commercial for the production of electricity, methanol and urea.

Simons, meanwhile, assured that ExxonMobil would be taking steps to ensure safety of its operations. “All of these wells have safety valves on them so if there is ever an issue down there, we can control the well first there. Also, all the umbilicals allow us to control the manifolds and the well heads themselves as far as controlling flow rates or shutting wells if that’s required,” he said.