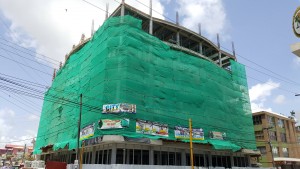 The building at the corner of Robb and Camp Streets where authorities have issued a cease-work order on the construction of a seventh floor.

City Hall has given approval for the construction of the seventh floor at a building on Camp and Robb Streets, but the owner still has been blocked by the Central Housing and Planning Authority (CH&PA) from going ahead with works.

In a letter dated August 24, 2016, Town Clerk, Royston King told the owner of the building, Rizwan Khan that the matter was discussed at the last Statutory meeting, but the city’s chief administrator did not provide any details about what has changed and whether Khan has since complied with any directives concerning the integrity of the structure.

It is unclear what has changed to cause the Mayor and City Council to approve the seventh floor. City Hall has not issued a release to the media, although the extension of that building has been of significant public interest.

From all accounts, the CH&PA is the final decision-making authority and it has not granted approval. “The ultimate responsibility lies with CH&PA. The use is determined by CH&PA, and to add another floor so as to change the use of the building has to be approved by CH&PA. That approval has not been granted,” sources  told Demerara Waves Online News.

From all accounts, the CH&PA has obtained a High Court injunction restraining Khan from continuing construction at the building.

King told Khan that after a review a decision has been taken to approve the construction of the additional floor. “The matter has been reviewed by the relevant agencies, which have statutory responsibility for such works and related activities…As a result the Mayor and City Council offers no objection to the addition of a seventh storey to the building at lot 102 Robb and Camp Streets, Georgetown,” King told Khan.

The Town Clerk further told the businessman that the Municipality’s engineers and technical officers would be carefully monitoring the construction of the additional storey and general building works. Khan was also told to “follow strictly the instructions and guidance of the City Engineer at all times.”

King said the Municipal Government of the City relied on the Georgetown By-Laws and the Municipal and District Councils Act. No mention was made of the CH&PA in the review process.

When contacted, Khan said he was overseas and he was unsure whether City Hall has green lighted the seventh floor.

Khan has long insisted that based on structural integrity tests, his building and its foundation are strong enough to accommodate a seventh floor to house a recreational and dining area for an intended foreign tenant.

The businessman has refuted claims by the CH&PA that based on the number of occupants at any one time in the building there would be insufficient parking and fewer than required number of toilets and urinals.