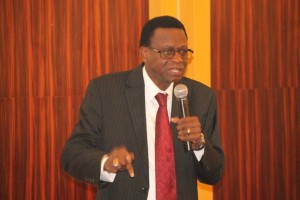 Distinguished Professor Andrew Jupiter delivering a lecture on “The Importance of Education in the Development of the Oil and Gas Sector- Experiences and Perspectives of Trinidad and Tobago.”

Prominent Trinidad and Tobago energy expert and University of the West Indies Professor, Andrew Jupiter has urged Guyana to use its recently discovered oil and natural gas as bargaining chip to secure higher quality education and technologies.

“The resources are yours and when the resources are yours and you are inviting various multinationals into your countries, that is great. It means that you have to see how you can improve your people and how you can improve the education system,” he told the more than 300 attendees at the Grand Savannah Suite, Guyana Pegasus Hotel, including top local officials of ExxonMobil, which plans to begin commercial pumping of oil offshore Guyana by 2020. There were also representatives of oil companies, REPSOL, CGX International,  Ministers of Finance and Natural Resources, and geologists who are aligned to the opposition People’s Progressive Party (PPP).

Delivering a recent lecture on “The Importance of Education in the Development of the Oil and Gas Sector- Experiences and Perspectives of Trinidad and Tobago,” Jupiter strongly recommended that Guyana follows his country’s footsteps in leveraging those fossil fuels in negotiations with multinational oil companies. 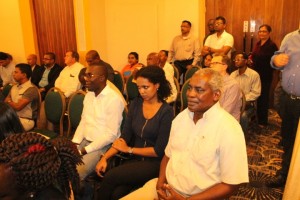 The Distinguished Professor said the his country’s production and production sharing agreements included revenue provisions for education and an administrative charge. That charge was US$200,000 in the first year and increasing at a rate of six percent per annum to help hire and retain top-notch employees at the ministry responsible for the energy sector. “You want the best individuals working in your ministry,” he remarked. The agreements also provided for another US$200,000 per annum to be increased at six percent per annum for the training of nationals of Trinidad and Tobago. If there is a commercial oil discovery, the company is required to pay US$250,000 per annum.

For petroleum-related research and development, Jupiter said oil and natural gas companies  are asked to pay an additional US$100,000 annually to be increased by six percent, and US$150,000 in the year of commercial discovery with six percent hike for the future life of the contract. He said some of that money is being used to train energy experts at the St. Augustine, Trinidad campus of the University of the West Indies. 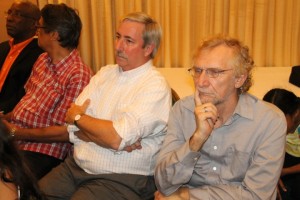 The deals with foreign oil companies, he said, were also fashioned to ensure that Trinidad and Tobago’s energy regulatory agencies were well-equipped to international standards at a cost of US$750,000 in each agreement. “You could have scholarships but if you don’t have the best technical equivalent, what will happen, so we say technical equipment must equal or even better than the oil companies,” he said. “We don’t only want increase in salaries but we also want top class equipment like for seismic testing and interpretation, we want that and that is what we got,” said Jupiter who is currently attached to the Department of Engineering at the University of the West Indies (UWI).

In addition to training education, administration and the purchase of high-tech equipment, Professor Jupiter said each oil company was required to deposit US$15 million into Trinidad and Tobago’s treasury for use in the social sectors and physical infrastructural development.

Professor Jupiter-who currently chairs Trinidad and Tobago’s state oil company PetroTrin- also informed that the negotiators of the exploration and production sharing contracts should be separate from contract administrators. “Contract administration should e even better or equal to the negotiators,” said Jupiter, a former Permanent Secretary of the Ministry of Energy and Energy Enterprises.

He urged Guyana to focus on other oil and natural gas related areas such as business development, leadership, building of alliances and collaboration as well as technology innovation and transfer.

Jupiter stressed the importance of Guyana to use its oil resources for human capital development through education, as well as strengthening its institutional capacity to ensure that the country can effectively plan, monitor and alter strategies in a timely manner. “You don’t always get it right the first time,” he said.