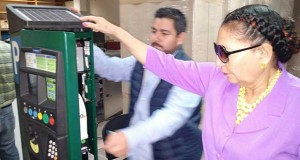 As Georgetown’s Mayor and City Council prepares to this week discuss the controversial parking meter contract that Central Government has ordered be revoked, the Alliance For Change (AFC) said if the matter comes down to a vote,  there must be no secret balloting.

AFC Leader, Khemraj Ramjattan insisted that there must be open voting when the parking meter contract comes up for discussion on Wednesday at a special statutory meeting. “Be brave and be honest enough to put your hand up so we know how you vote,” he told Demerara Waves Online News.

The AFC has already maintained that the contract between the City Hall and Smart City Solutions Inc must be scrapped altogether, in its clearest signal ever that it is pushing for integrity and transparency to set it apart from other political parties.

He reasoned that if councillors vote secretly, they would be cheating the public who voted for them, although several A Partnership for National Unity (APNU) councillors are opposed to the model for that new revenue generating contract. “If APNU (A Partnership for National Unity (APNU) people want to oppose it, let them raise their hands proudly (and say) ‘we oppose’. If AFC want to oppose it let them oppose it. That is how the democracy must be and we must know our elected representatives so next time they come to be elected we will know ‘on this thing you had voted so’…,” he said.

Ramjattan stressed the need for open democracy and then he would decide whether such elected officials should be given another opportunity.

A review of the parking meter contract by the Minister of Finance states that the deal violates the tender procedure and should be revoked. “Government procurement requirements may have been violated, in that a tender was not advertised and bids received for acceptance based on certain criteria and as such justifies revoking of the contract by the Government and the retendering,” states the review.

Central Government also described the prices as “outlandish” and it appears that no feasibility study has been done to determine break-even and profit positions. The Ministry of Finance calls on City Hall to provide a history of the contractor and provide some justification on how the parking fees have been arrived at. One of the key figures behind the parking meter project is Kamau Cush, an ardent supporter of the People’s National Congress Reform (PNCR), the main partner in APNU.

Also evoking a warning was the danger of a monopoly that could ultimately impact on the citizenry. “The contract has given complete monopoly over SCSI over parking within Georgetown. This control could lead to exploitation of consumers as SCSI has the power to change fees arbitrarily and determine zones etc.