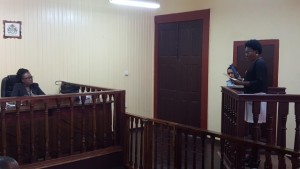 A Commission of Inquiry into the deaths of two children in a fire at the government-run Drop-in Centre last month has recommended that the mother be compensated, after finding that the staff is unqualified, there were insufficient officers on the night of the blaze as well as failure to heed six-year old recommendations by the Guyana Fire Service to improve fire safety.

“That some form of compensation be awarded to Ms. S. George, the mother of the two children who died in the tragedy while in the care of State,” states the Commission of Inquiry that was conducted into the July 7, 2016 fire at the Hadfield Street, Georgetown- based Drop-In Centre.

According to the investigation, the remaining 29 children did not suffer any physical injuries. However, several of the older girls ranging from nine to 17 years old were still traumatised. “These children, who blamed themselves for the deaths of the two children, were often having flash backs and not sleeping well at night.”

Conducted by Guyana Defence Force (GDF) Retired Col. Windee Algernon, the probe found that conduct of the staff on duty on  the night of the fire was not in conformity with the required protocols statutory obligation of the State and Standard Operating Procedures. “The COI unearthed an absence of understanding and rehearsals of the SOPs for the handling of crises situations. Consequently they were not applied before or during the fire , resulting in an unplanned, ad hoc evacuation of the children at the drop-in centre.” She said one of the Social Services Assistants on duty sought to alert the emergency services of the fore by calling 911 but was  unsuccessful.

Algernon further reported that State officials failed to hire competent and qualified staff and put in place adequate supervisory and oversight mechanisms to ensure compliance with the Minimum Operational Standards and Regulations (MOSR). Among the other recommendations are that an Inspector of Homes be appointed immediately and that the Visiting Committee be reintroduced to ensure compliance with MOSR.

Based on the report, Algernon found wide-ranging deficiencies in fire safety and extremely emergency management at the two-flat concrete and wooden building. “The COI found that there were adequate written guidelines for the management of crisis situations, including fire. However, the House Manager, House Supervisor or Social Services Assistants on duty seemed unfamiliar with them, consequently there were no rehearsals. Thus when the fire occurred there was confusion and panic resulting in the tragedy,” Algernon states.

In the area of fire prevention, the Inquiry discovered that the Drop-In Centre was physically ill-equipped to deal with an emergency such as a fire. “There were no operational fire escapes,

no smoke alarms, no marked fire exits and signs on the wall stating what to do in cases of fires. There were however fire extinguishers and fire blankets on both floors of the Drop In Centre. The children and SSAs (Social Services Assistants) were not trained to use fire extinguishers or fire blankets,” states the report which has been already presented to President David Granger.

The probe found that the fire was caused by a defective electrical point fitted with exposed wires on the eastern wall of the girls’ dormitory. “This played a role in the fire ignition and subsequent heat transfer which caused the fire to travel via the electrical conduits in the ceiling.”

The COI found that recommendations from the Guyana Fire Service in 2010 and 2015 in the interest of improving Life and Fire Safety at the Drop In Centre were not fully implemented. The 2011 inspection and subsequent report were done after a fire of a similar origin at the Centre.

At the time of the fire, the Drop In Centre was slightly overcrowded 31 rather than 21 children- and there were fewer than required SSAs managing the facility. “The COI found that there was inadequate staff rostered to work on the night of the tragedy, which was in direct contravention of the Minimum Operational Standards and Regulations for children’s homes in Guyana.

The report found that: Residents at the drop in centre at the time of the fire were aged and numbered as follows; two children under five years, nine children between the ages of five to 12 years old and 20 children between 13 to 17 years old. Using the children/ staffer ratio, a minimum of six rather than two Social Services Assistants should have been on duty to adequately meet the needs of the children. Additionally, the House Services Supervisor, Claudette Mentor had the authority to call out additional staff but failed to do so for no valid reason

Algernon has also told President Granger that qualified and experienced staff must be employed to man the Drop-In Centre because the MOSR states SSA’s (Caregivers) must have either a Diploma in Social Work, Sociology and three years experience working with children or a Trained Teachers Certificate along with a valid police clearance or secondary education and 10 years experience caring for children.

If Algernon had her way, she would remove the Drop In Centre from Hadfield Street and relocate it “to a more suited environment to cater to the developmental needs of the children” and also change its name.

In terms of who should be blamed for the deadly fire, she said everyone associated with that child care and protection entity should bear responsibility. “The COI found that this was a tragedy waiting to happen and that there was collective responsibility for the tragic event which claimed the lives of Joshua and Antonio George. The system to protect the children failed and therefore all the players are collectively responsible,” said Algernon.

The Commissioner, at the same time, pointed fingers at several officials but she did not recommend any specific disciplinary action against them. She said while SSA S. Jones, who was on duty at the time, could not be entirely absolved, the two children died in her care.

“It must however be noted that the administration of the Drop In Centre in collaboration with the Child Care and Protection Agency failed to ensure that she possessed the skill set to perform her responsibilities adequately.” In relation to Ms. Fraser, who is currently carrying out the duties of Deputy Director of Policy and Development and has overall responsibility for the administration of the three child care facilities including the Drop In Centre, Algernon said she  should be held accountable for  not ensuring adherence by the Manager and Supervisor, to the SOPs governing human resource and protection from fire and  other disaster.

Algernon added that Ms. M. Gentle, Manager for all the Care Centres including the Drop in Centre, who is directly responsible for monitoring staff performance, arranging staff training and ensuring that all buildings which house Care Centres are maintained and secured should be blamed for failing to discharge her responsibilities in an efficient manner

Ms. C. Mentore, the House Services Supervisor of the Drop In Centre with responsibilities for the general administration of the facility, Algernon said, should be blamed for not calling out additional staff on the night of the tragedy, an authority vested in her appointment. She also shared the responsibility with Ms Gentle for arranging staff training.

Algernon gleaned that there was no inspection of the Drop In Centre after the girls’ dormitory was completed and it was re-occupied.

child protection, cutting red tape and improving the skills and knowledge of social workers so that they could adequately protect children in the State’s care; emergency evacuation plans, including safety protocols,  be developed and practiced at all child care facilities; in-house training including rehearsal be conducted for staff in crises management at all Child Care Centres; Child Care Workers be given additional time away from the working environment to allow them to relax after  a period of work or tension, and that suitably qualified staff be recruited to meet the increasing demands of Child Care responsibilities

Further, the Inquiry urged the Child Care and Protection Agency and Non-Governmental Organisations (NGOs) to put aside perceived personal grievances, stop seeking self-promotion, work together and focus on the objective of providing quality care, service and protection to children in the care of the State.