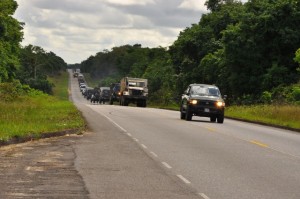 The Guyana Defence Force (GDF) Field Tactical Exercise (FTX), HOMEGUARD commenced Tuesday, August 16, with the final contingent of troops moving into the exercise area located in the jungles and savannahs of Ituni and Tacama (Regions 10 and 6).

“The Exercise is designed to assess the GDF troops in Close Country Warfare (CCW) and Open Country Warfare (OCW) simulations of battle. The Exercise will also be utilising all available resources and pitting the troops against a simulated enemy, in order to validate training at all levels,” the GDF said in a statement.

The Exercise will continue over the next ten days and culminate on August 26.

The GDF said brainstorming of the various scenarios and the totality of the Exercise, occurred during the Study Days and a Command Post Exercise (CPX) which were conducted over the past two weeks. Following these activities, a Tactical Exercise Without Troops (TEWT) was conducted.

Exercise HOMEGUARD comes ten months on the heels of the successfully completed Exercise GREENHEART which was conducted in Region Seven last November. The GDF explains that those xercises are all part of the continuous training for the Officers and Ranks of the GDF, and are also designed to enable them to test theories and develop new strategies related to how OCW and CCW can best be executed.