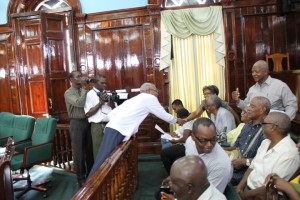 Workers, who continued unbroken services from Guyana Telecommunications Corporation (GTC) to the Guyana Telephone and Telegraph (GT&T), are preparing to take their concerns about the inaccurate pensions to President David Granger.

Estimates are that more than 100 pensioners have not been getting their correct pensions in keeping with their last salaries at the age of 60 years, because the Ministry of Finance continues to ignore official Guyana government promises dating back to the mid-1990s that assured them of their pensions and gratuities. This means that for several years now, many of those who continued unbroken service in the two entities have been receiving the minimum government pension that now stands at GYD$37,000 instead of being pegged at their last salaries at age 60.

GTT does not offer a pension, but instead a lump-sum gratuity that could be taken all at once or over a given period.

Well-placed sources said the Pensioners Association and the Guyana Postal and Telecommunication Workers Union are preparing to ask GTT for a list of retirees who had continuous unbroken service from GTC to GTT. After collecting that information, the union and the GPTWU intend to lobby President Granger for corrective action.

The pensioners maintained that in keeping with formal decisions by the Guyana government back in 1990, there was no break in service although the Guyana Telecommunications Corporation (GTC) had been scrapped and a new company, Guyana Telephone and Telegraph (GT&T), had been formed prior to its 80 percent privatisation to Atlantic Tele-Network (ATN).

Finance Minister , Winston Jordan was adamant that pensions could not be paid retroactively and that the disgruntled ex employees were far better off now because their pensions have from this year been pegged to the salaries of identical or similar positions. “We did include the number of years, not the salaries they would have gotten in 1989, 88… We used the current salary as of last year October or November of GTT for similar positions or same positions,” he told Demerara Waves Online News.

However, well-placed sources have since explained that what Jordan has done is simply rebased the pensions for those persons who had retired in 1991 at time of GTT’s privatisation to ATN. That rebasing, the sources said, does not apply to those who continued with the company from GTC to GT&T. Another area of concern is that the list of the rebased pensioners is inaccurate because several of those persons never retired in 1991 and a few others might still be working to date at GT&T.

Jordan explained that the pensioners had been originally paid some monies by the National Industrial Commercial and Investments Limited (NICIL) and again when they were paid , many of them said it did not represent what they should get so they had some ongoing discussions.

The Minister said government did not ask the pensioners to refund those monies that had been first paid by NICIL and instead used existing salary scales to pay them from April, 2016.

The GPTWU last month told the Finance Minister that after a thorough review of the list of names that it has received from the Accountant General, the Pension Act has not been complied with in respect of those former GTC employees whose services were transferred to GTT, the names of some employees that were working with GTC prior to 1991 and continued with GTT are not on the list and that the Finance Ministry has complied in part with but in whole as it relates to the former employees’ pensions.

The Finance Minister said the only outstanding issue is to include those who were not on the database. “As soon as they come, we have to start the process of tracking, verification and so on and once that is done they will get paid,” he said.

Accountant General, Col. Jawahar Persaud has since dismissed most of the union’s contentions while acknowledging the need for ongoing reconciliation of the database. At the same time, he hinted strongly that the door has not been closed on further talks about the continuity of service from GTC to GTT. “It is noted that there may remain areas of contention as it relates to the agreement between GTC, GT&T and the Government, as well as the interpretation of the Pensions Act and the pension and gratuity of some employees who continue to work with GT&T and who have now reached GT&T retirement age of 60 years and have more than 33 1/3 years of service. While discussions on these matters can continue, I would urge that all eligible former employees ensure that they receive their pensions as currently computed,” said Persaud in the letter dated July 22, 2016.

In letter to employees dated December 19, 1990, then GTC Personnel and Industrial Relations Manager, C. Blackett had stated that “You will be continued in employment with GT&T and your service will be treated as continuous and unbroken and the other conditions of service will not be less favourable than what you presently enjoy.” That letter further states that gratuity and pension “will become due and payable to you when you finally retire from the service of GT&T, or your employment with GT&T is terminated, in the circumstances which, had you been employed with the Public Service, you would be entitled to a pension and gratuity under Section 8 of the said Act. The liability to pay the above benefits, when they become due and payable, will be transferred to the Government in the Ministry of Finance.”

Similar provisions are contained in a memorandum of understanding between the Guyana government, GTT and GPTWU.

2016-08-15
Denis Chabrol
Previous: Newly-formed vendors union to push for selling outside Stabroek Market
Next: Linden Town Clerk to be summoned to hearing on motion for her removal