Newly-formed vendors union to push for selling outside Stabroek Market 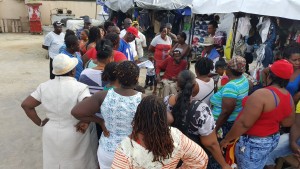 The newly-formed Guyana Market Vendors Union (GMVU) says it will be pushing for vendors, who were removed earlier this year from the Stabroek Square, to be relocated just in front of the Stabroek Market where buses once parked.

GMVU President, Eon Andrews told Demerara Waves Online News that vending is a culture that relies heavily on sellers’ closeness to passersby who are often potential shoppers.  On concerns about poor sanitation and less than satisfactory security, he said the vendors would take care of cleaning the areas and the City Constabulary and Guyana Police Force would deal with security. “Under the administration of the union, there will be some serious discussions about the standards that have to be the maintained,” said Andrews , a former City Councillor.

Since the estimated 135 fruit and vegetable, clothing, phone card and other vendors were removed from the Stabroek Square in May of this year and placed in a vacant plot of land at Lombard and Hadfield Streets, their numbers have dwindled to about 80 because sales have been extremely low there. “They are not making money. They are not happy. It is hell in there.”

Vendors desirous of joining the union will have to pay an application fee of GYD$2,000 and GYD$1,000 monthly by the 5th of ever month. 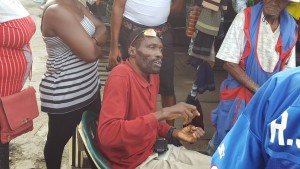 Andrews and other GMVU executive members held an informal sensitization meeting with several vendors at Parliament View, urging them to join the union and let the executive members know their grievances in detail. He said two vendors would be required to accompany union executives to meetings with the Council.

He said with the formation of the union, no longer would the Mayor or the Town Clerk have to summon the vendors to meetings in City Hall’s compound but they would have to interface with their representatives through GMVU. “You only do so to staff. You all are not City Hall staff that when they call you, they got everybody running,” he said.

Andrews promised to “lead from the front” and assured that legal representation would be provided to the vendors if required.

City Hall has been given until year-end by the land-owner, Hareshnarine “Chiney” Sugrim to find somewhere else to relocate the vendors, as he needs his property to begin the construction of a high-rise parking facility and fast food outlet.

The GMVU-located at 208 Freeman Street, East La Penitence, Georgetown- hope to represent market and itineramt vendors countrywide, educate them about the rules of of good hospitality and service, provide medical, insurance and hospitalisation schemes and other benefits, act as an agent in the importation of goods and assist the relevant government ministry or other authorities in fixing prices and charges for vendors in Guyana’s municipalities.

The union also aims to assist in and act for members in registration, payment of contributions, application for benefits, hearing of appeals and acting in all matters related to the National Insurance Scheme.

2016-08-14
Denis Chabrol
Previous: Some gun licences to be revoked- Ramjattan
Next: Dissatisfied GT&T retirees to lobby Pres. Granger for their correct pensions