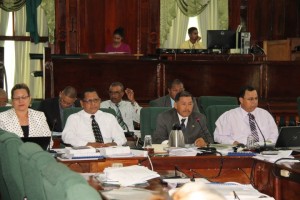 Minister of Indigenous Peoples Affairs, Vice President Sydney Allicock on Wednesday came under intense pressure to justify likely changes to the law to widen the role of  Amerindian communities in determining whether large scale mining should go ahead in their communities.

Member of the bi-partisan Natural Resources Committee, Pauline Sukhai and Committee Chairman, Odinga Lumumba questioned why the apparent need to change the Amerindian Act because there are no large scale gold mining operations on Indigenous Peoples’ lands.

Allicock and his Legal Adviser, Attorney-at-Law, David James told the committee that the National Toshaos Council (NTC) and other interest groups for the Amerindian Act to be reviewed, prompting the need to gather more information.

“There has been a call by indigenous villages across the country in our outreaches over the past year. In almost every village that we have visited there have been calls for revision if not to the entire Act to certain aspects,” James said.

James’ announcement of a “concerted request” that certain provisions related to gold mining should be changed to allow for “full consent of Indigenous peoples is obtained before large scale mining could proceed” ran the government delegation into a collision course with Sukhai, a former Minister of Amerindian Affairs up to May, 2015. He noted that the law provides for consent from Indigenous Peoples for small and medium scale mining.

A legal consultant has been already hired to examine the way forward for such amendments.

Saying that she was aware that none of the villages that she has visited during the past year has submitted anything in writing to the Minister of Indigenous Peoples Affairs, Sukhai questioned whether the view was being fuelled by the NTC, elected officials of the Indigenous Peoples, grouses by the APNU and AFC over the existing Amerindian Act or concerns by the Amerindian Peoples Association (APA). The opposition People’s Progressive Party Civic (PPPC) has always had an antagonistic relationship with the APA.

On the contrary, Sukhai said a document was delivered to the NTC for consideration with the “APA seem to be taking the lead and not the NTC.”

Responding to a question by Sukhai about whether as an Indigenous leader at the highest level he had real concerns about the Amerindian Act, the Minister said one has to do with the Guyana Geology and Mines Commission having to satisfy itself about lands that are available for mining.  He added that authorities needed to consider the environment and inhabitants of the area.

The Minister then asked his Legal Advisor, James to bail him out: “With respect to the first question on whether there is any Amerindian village that is affected by large scale mining or is being in any way violated or try to be violated as a result of large scale mining, the answer is none.”

James, however, explained that communities such as Jawalla and Kamarang want the law to provide for “full consent” as is the case for small and medium scale mining.

He acknowledged that the law states that if an Amerindian community withholds consent for large scale mining, the Minister of Indigenous Peoples and the Minister of Mining can consent to mining in the village in the public ‘s interest. The law also provides for the Amerindian village to take the matter to the courts if they oppose the granting of ministerial consent.