Suriname-headquartered airline set to begin serving Guyana, other Caribbean destinations from this month 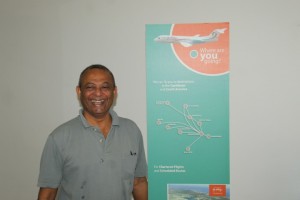 The Suriname-headquartered airline, Fly Allways, says it will soon begin serving several Caribbean destinations where there are large populations of Guyanese residents.

Using two Fokker 80-seater jets, the carrier is slated to begin scheduled flights on August 9 on the Suriname- Guyana-Barbados route.

Plans are on stream to add St Maarten, Curacao, St. Lucia , Dominican Republic and Cuba to the list of destinations in the coming months. “I think we got the information from several travel agents and tour operators that there is a huge Guyanese community in St Maarten and we try also to attack that market because none of the airlines has a direct flight to St. Maarten and this is a very unique opportunity for the Guyanese people to visit the country and also for people who live in Guyana to visit St. Maarten,” Fly Allways’ Consultant, Ronald Sahtoe told Demerara Waves Online News.

He said that while his airline would be using the Cheddi Jagan International Airport (CJIA) instead of Ogle International Airport because of the size of the jets, passengers will arrive at their destinations quickly. He said the fares are not expected to be much higher or lower than those being offered by LIAT.

Sahtoe noted that Caribbean peoples are trying very often, but it takes a long time for them to reach their destinations. The official assured that The Netherlands-made Fokker aircraft will be flown by Dutch-trained pilots.

The airline has already opened a Guyana office at Croal Street and United Nations Place, Georgetown.